I went to an interesting talk last night at the Art Dept of the University.
Amongst the many discards of modern society are clothes.   Our foremothers, and some present day folk , but alas not enough, recycled clothing into quilts.   Before synthetic fabrics, the clothes would be divided into wool or cotton and the fibres reclaimed and remade into a lower quality, but still useable, fabric of some kind.   But now there are way too many discards for any number of quilters to remake!  And the fibres are too mixed for the natural ones to be reclaimed.  Great mountains of unwanted used clothing rejected by the thrift stores are built up every week.  These are sorted and the more useful clothing sent to very poor countries like Haiti, but great hills of evening gowns, fancy dress, costumes and wild stuff remain.  Even if Tim Gunn and his Project Runway crew were multiplied one thousand fold and on telly as often as sport or political chat bovine waste, there would be vast quantities left engorging landfills.

Along came a couple of artists: known collectively as Guerra de la Paz.   Guerra de la Paz is the composite name of  Alain Guerra  and Neraldo de la Paz, who have collaborated for over 10 years.  They were born in Cuba but have lived in Miami for several years.  They were originally painters “who didn’t want to continue painting”.  They were inspired by the many weathered billboards in their area of Miami; the effect of nature on layered paper.  Seeking free art materials, they were given thousands of magazines which they layered into collages, then deconstructed, peeling and sanding off several patches and layers to create mysterious mixed images.  Describing their process they called this “letting go the ego” not caring which bits might be thought precious but rather leaving the results totally to chance.

One day they spotted several large dumpsters overflowing with great hillocks of unused clothing.  Further investigation lead to the discovery of mountain ranges of clothing in vast warehouses.  “Great free material and plenty of it!”  They got a commission in Miami for an outdoor installation and over a period of several weeks created “Overflow”, a waterfall of clothing descending from the gallery roof down the side of the building.  They were fascinated by nature’s partnership in the process: the sun bleached, the rain enrichened colour, the wind made the fabric dance.

Once they started using society’s discards more and more came to light; the fruits of excessive consumerism (itself begetted by unbound free enterprise reinforcing Greed), provided more and more opportunities to free material.  They used everything.  And began making more and more sophisticated shapes and comments on society. 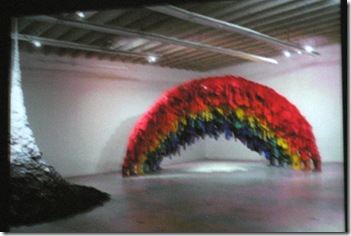 (Apologies for quality of photo, taken from the corner of a dark auditorium!).

In this installation the “rainbow” is an armature arcing from one set of coloured boots on the left to the right (yes, those are wellies under the clothing!  supporting the mass of fibre detritus). 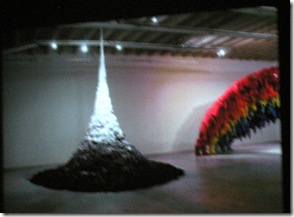 The piece on the right,
called Ascension
is composed of clothing arranged from white through grey to black supported on a spider web armature.

I wasn’t able to get pictures but some of their most striking work was made from ties.  They formed snakes from the ties, with the open wide end of the tie forming a snake’s mouth with the narrow tongue (the narrow end of another tie) forking out in a vicious venomous attack.  Headless mannequins in smart sober business suits had ties transformed into snakes as they faced off in their business deals, hands shaking below, pointed tongues above!

They made a family from the clothing, with sock faces and discarded wigs.  Thinking it would be appropriate to have some family photographs, they took several of them to a Walmart photographer so they could obtain “that perfect family memory” standing in line with all the oversize moms and babies….but Walmart was enraged!  And refused to take the photographs!!  What! have a social comment on excessive consumerism in our halls? Not us!

So, before you rush out to buy more fabric!, make a nice cup of tea and have a leisurely look at the possibilities in your own wardrobe!

And, if you have been, thanks for reading.   Elizabeth

Posted by Elizabeth Barton at 7:07 AM

Fascinating! A Gee's Bend exhibit is coming to our local museum and I remember reading (a few years ago) about one of them, on being given some money for fabric in the Bay Area, went to a used clothing store for her purchase. I thought I might try that. I'm taking a class (a mere four hours) with two of the women in a couple weeks, haven't seen a supply list and can't imagine we'll be able to accomplish much. Still it will be novel and interesting. Thanks for nudging that line of thought along.

I've been using thrift store finds in my quilted items for a while and felt guilty about using nice quality clothing rather than allowing them to be purchased for wearing. You have opened my eyes, and I will gladly use the discards, guilt-free, from now on. I read this year that the cotton industry uses 25% (!!!) of the world's pesticides. It's time to use what we already have.

In addition, in times past rags were collected for the fibers for paper (linen and cotton were broken down). I look at my holey cotton sweaters and cringe about throwing them away, but I can't figure out what else to do with them (well, except for 1). Maddening!

I did pass up a yellow formal which was only $5 at Macy's last year because it was close to prom season and while I could use the fabric in my quilts, the thought that some girl might need or want the dress kept me from doing it. Interesting to see what these guys are doing. Thanks for sharing.