Last night Mary Porter’s and my show of paintings and quilts opened at Aurum Studios Gallery (their website is sadly in need of updating, but the directions to the gallery are correct!). There was a goodly attendance and a nice fat red dot appeared under one of my watercolours, plus a nibble at one of Mary’s paintings (enquiring minds asking what a nibble looks like should know that they’re usually transparent!).

It’s always lovely to see the work hung well in a nice gallery. I have been lucky enough to have a one or two person show almost every year since 1995 – two years after I started making art quilts. Having a show forces you to keep working, to stop making excuses to yourself about being busy or tired, it makes you finish up pieces…even if that means cutting out the 1/4 of it that’s the “good bit” and discarding the rest! A show puts a real obligation on you to justify every piece, make each one as strong as you can and to avoid trite and sentimental expressions of ideas. It makes you focus in on what is important. It’s also both a great fillip (wow i did all this!) when you can fill a room with colour and light and interested people, and a hard look at critical reality (oh no that piece in the corner looks really weak, never again will I try to make a flower quilt that way).

People have asked me: how d’you get shows? Keep your eyes and ears open for opportunities. My very first show at a really nice private college happened when I met someone who casually mentioned that one of their duties was arranging shows in the college gallery. I asked her if she’d ever considered showing quilts…and followed up with a few postcards. About 3 months later I got a call, someone had had to pull out of their show in one month’s time, would I be interested? Always Say Yes!! Even if you have to work night and day to get the work out there. Another show happened when I visited the loo in the art department at the university and saw an application form for a show at an art center in Atlanta scrunched up on the floor!

A couple of times I’ve entered art shows where the Best of Show prize was a solo show…either at that same center or at another gallery and I was lucky enough to win both. Keep your eyes open. Most colleges and universities have several galleries and love to change the exhibits monthly, most towns have Art Centers, most towns have small private galleries. My next show is at a private college in North Georgia – Young Harris College – they put out a call for artists on Art Calendar which I found online. 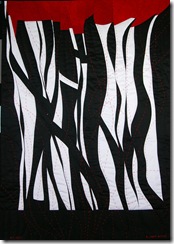 Another excellent event this week was finishing another black and white piece. I wasn’t sure if that particular series had come to an end because the industrial landscapes had been quite magnetic at attracting my attention for several months. Taking another look at my quilt in Quilt National ‘09, I realised I wanted to push several elements that were in it further. I had quilted most of it in black and white, using only a little red thread at the end. This time I wanted to have much more of the red, big juicy stitches that leapt across the fabric! Also I want to play around with the red at the top to give a sense of curves to the piece and I wanted to try to get more flow into it. I’ve entered it into a good show, so fingers are duly crossed!! to say nothing of other portions of my anatomy…maybe it’s time to go and look at another loo floor for an opportunity!

Posted by Elizabeth Barton at 9:06 AM

Your show was wonderful and I am so glad that you sold a piece!!!!

The red at the top of the new piece is magnificent! It is eager to grown, lovely shapes--well done!