The Art and Agony of Entering Shows 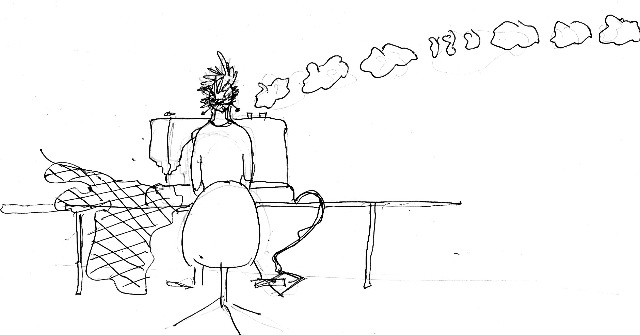 I’m sure when I’m not blogging you must imagine me crouching over a smoking sewing machine whipping out amazing pieces! would that were so!  Actually, the smoking bit was all too real a couple of weeks ago  when my old  Bernina decided to blow its circuits.  I’ve never had a machine start sending out smoke signals while I was zooming along before…quite dramatic!

But no I’m not always productively engaged….the business of being an art quilter takes nearly as much time as the sewing.  Yesterday I decided to complete a few show entries…they’d been piling up for a while (i.e. I’d been putting it off!).  After about 6 hours I think I had four of them done.  First, we  switched from slides to CDs.  Now we’re switching from CDs to online.  Nobody has the same format – not that they did for slides!  One would want an arrow at the top of the slide, another a red dot, the next  place wanted the red dot  on the bottom…have you ever tried to move a red dot?
For a while I had my name and the date printed on the slides …thinking it would be neat and clear.  Of course they always wanted the name on the left if I’d had it printed on the right…so then I had to black out my name in order to rewrite it one inch away!   I was always too stingy to send a whole page of plastic slide holders, so would cut out a strip – invariably snipping off the end bits, which then had to be mended with tape!

Along came CDs – should we have 72 ppi, or 96?  (96?!).  Or maybe it should be 300?   or perhaps some combination?  And size? 5 x 7, or 4 by 6?  or something else?  Or, size would not be mentioned but “if not correct size, application will be disregarded”!   yesterday one form instructed me in paragraph A that the maximum size was 48 x 48, and in paragraph B that it was 60 x 60!
How should  the file  on the CD be labelled?    some easygoing shows sensibly required a simple  “name of artist, name of piece”…but one I remember had a complicated formula involving my name, the size of the piece, the date, the medium and the name of the cat!  Plus  everything in between. With hyphens - - -

Then they required artist’s statements with the entry! And resumés!   I thought I could make that easier by writing out standard versions of each that I could just print out – Alas no!  A specific number of words would be required…shorter and shorter until finally I was driven to rewriting the paragraph with a sort of Russian accent, omitting all the definite and indefinite articles: “quilt is beautiful, will hang on wall so wonderfully!”  Once I devised an egregiously wordy, fulsome and nonsensical paragraph based on some benighted art critic laying on the artspeak : “the unexpected way the formal issues are addressed by the juxtaposition and confabulation of adherent forms yields a pathologically perfect pointillism to the Renaissance surrealism embodied within the layers of meaning”.  I remember having to tape record a text book years ago, I got so bored with it, I kept changing accents and dramatic roles switching from Professor Punctilious at the Podium to Lola the lush leaning over her lime and vodka….

At least with slides and CDs the rest was fairly easy, write a check,  fill out a form (usually printed with vital information on the back which you didn’t discover until just after you’d sealed the envelope) and into the mail.
Yesterday I attempted 2 online entries – I say attempt because I have no idea if they “worked” – what I do know is technical writing (as in clear instructions on the website) is a lost art, Visa cards from Amazon don’t work for the generally used payment system, and going round in circles on the computer doesn’t use up as many calories as it should.  I always felt you had to be comfortably off, middle class, educated and literate to enter shows (which limits the entries tremendously), now I realise you need to have access to tranquillizers before you start, and a good hairdresser to cover the bald spots when you’re finished.  And I mean finished!!

and, if you have been, thanks for reading!  Elizabeth

Posted by Elizabeth Barton at 6:49 AM

Absolutly classic!!! Thanks for a good morning laugh! Mary

I read it, and it made me smile. Thanks a lot!

OMG - toooo funny!! Been there - done that! After going through the process, it makes one wonder if its your art they are critiquing or how well you follow directions. THEN if they do deem you worthy to get in, there is a whole other set of hoops to jump through to send your entered work. The last show it took me 45 minutes to pack a wall hanging.

I've caught my old Bernina smoking too. At the time I was making curtains and going as fast as the poor machine could, no wonder it needed a break. I quickly sent it out into the garden, had a baby in the house at the time. Your art critic art speak made me think of Sir Humphrey Appleby from Yes Minister if that rings a bell with you. Hope your machine gets it's replacement board and is up and running in no time and that the tranquillizers work if not for you then for the machine. Good luck with the entries

Today is photography and paperwork day for entering a forthcoming exhibition. I'm limbering up for my triple somersault with pike twist now.

Enough to put you off entering!

Hilarious! And too true. I've about stopped entering shows because it is such a time-consuming hassle. Argh.