Quilt National; definitions of “body of work” and “series”

Thank you for you interesting comments to my last blog!!
So interesting that in fact I’d like to continue the discussion……. 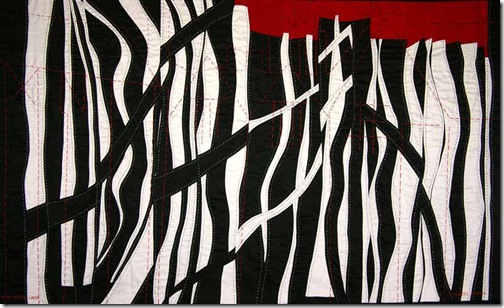 I hadn’t posted this picture before because of the Quilt National rule that doesn’t permit one to enter a piece that has been seen before – anywhere.  In fact, I’m told, they hire a researcher to check on all the accepted pieces to make sure they hadn’t been published, posted, viewed or aired in any way.  So for several months I didn’t reveal  this piece, or the two 0thers that I was entering!  While QN’s care in this seems a little excessive, I do appreciate the fact that the show and the catalogue are then definitely New Work.  I’ve been quite irritated in the past by seeing the same quilt in several different shows, catalogues and magazines.  Furthermore, QN have a very quick turnaround time from entry to notification for which they should definitely be commended.

The reason I’m showing the piece now is because this quilt was the 12th one in a series.  Here’s the first one in the series:

I would define a series by the way as a  group or succession of related things – objects that go together.  They can go together in a number of different ways, some I think more meaningful than others.   This series for me was related because I used the same very limited  palette, the quilts were inspired by (but not copies of) timbered houses I had seen in York, Stratford and Warwick.  I found the drooping lines of the roofs fascinating in that as age and time prevail, the “man made” aspect of the building begins to echo more and more the natural curves of the timbers used.  I also got a little carried away by the abstract patterns created by the timbers, and in the 12th piece, repeated some of those elements several times – just taking the bits I liked and repeating them like a doodle!!

So a series of objects could be related by a central idea – e.g. all containers (though the colours and shapes could vary), or by a certain shape that repeats, or by colour, or any other of the basic elements with which we work.  A collection of pieces that bore no relationship to one another would be more confusing to view as a whole.  My father always used to jumble up the slides when he gave us kids a picture show and while it was hilarious as successive images were shown: “here we are  on the beach, oh no now we’re in the marketplace, oh and the next one is little brother’s birthday and then the garden, and back to the beach and then another flower..”…hilarious – but confusing, jumbling, and frustrating because  you can’t get into the feel of the place or the idea.

I don’t think though that one should be working in a series just because the judges want to see “a body of work”!  For one thing, the phrase “body of work” has been sadly misused in the quilt world.  Basically it means an artist’s entire oeuvre – and while it would be good to submit all one hundred (or whatever) quilts one had made to the jurors for a specific show – I don’t think they’d ever get to go home on that one!!  For another – individual growth will develop straighter, more surely, more validly and honestly if one is not overshadowed by the imagined comments of a juror.  Don’t make the work for a juror…make it for yourself.  Make it your best shot at conveying that idea you had when you looked at the tree, or saw the rocks under water, or observed the pattern of shadows on the wall.  And, if you don’t get it the first time….try again – maybe from a different angle, maybe closer, or further away, or in a different light…

When entering a show, however, it is important that the judges not be confused by 3 very separate ideas.  They say this is because it’s evidence of a shallow oeuvre, and that might be so…but also it’s likely that it’s much harder to see the individual’s style with 3 very different pieces.  Furthermore, you might wonder about 3 different workshop influences, and it’s very hard to figure out which is the best piece when comparing apples and movies.  So there are  lots of reasons to enter 3 pieces from the same series.

A series doesn’t have to be planned out all ahead of time, but I think certain parameters  either have to be set or will emerge.  If there’s no central idea, or nothing that relates one piece to another then it’s not a series.    It might well not be deliberate in the sense of  I Am Now Going To Do a Series…but it could be!  I think it more likely that the serial quiltmaker (of which I consider myself one!) gets fascinated by something and says after the completion of the first piece: “oh!! I wonder if I’d just looked at that from a different angle”….or: “if I’d just tried a different arrangement of those same shapes”….or “what if I just cropped that a little”….or perhaps: “hmmm, it doesn’t look bad but it doesn’t quite reveal what I saw that day…let me have another go..”.

If you keep making pieces where you didn’t quite get the idea across that you wanted, but you then abandon that idea and try something completely different, I don’t think you’ll progress.  It’s practice (i.e. repetition) that “makes perfect”, not dabbling.  Actually, the research shows us that it is both practice and coaching or critiquing that leads to improvement in performance – but that’s another issue!

Some people have commented that they’d feel very limited by only working on one series.  I totally agree!!  There are many examples of great painters, e.g. Gerhardt Richter, who work in different series simultaneously.  I definitely don’t want to “close” a series and in fact I’ve stopped dating my quilts because I don’t want to be chronologically constipated!  For the moment I have nothing more to “say” in the black/white timbered series…but one day something will spark.  I also began to feel I was repeating myself in the nighttime medieval street series and so have left that one alone for a while until a fresh idea occurs.  I am still very drawn to roofs and chimneys – and got several neat examples in Kendal on my last trip….so will definitely be going back to those ideas very soon.  Whereas the drowned city series were beginning to look like one another just too much, so that one may well be done.

Working in a series would be one way to help you define your style, but not the only way.  In fact I think developing a style tends to happen as one makes more and more work.    To define someone else’s style one might very much want to look at different series that they had made – to observe the consistencies across series.    I definitely think that it’s a good idea to become aware of one’s style, which I see to be a result of making specific technical, compositional and thematic decisions as you make more quilts.  I don’t think it would be very honest to try to force it, or to develop a style solely based on someone else’s.   In my workshop Inspiration to Fulfillment: developing your own style, we discuss how to look at your own and someone else’s work for evidence of a certain style.  I think a good pathway into it is to look at a catalogue without looking at the names of the makers and everytime you “know” that is a quilt by X or by Y, ask yourself how you “know” that?   If people say to me – you have a definite style, I ask them what it is that they see.  Style is a combination of a set of technical preferences, a tendency to solve problems in a particular way, and certain outlook on life.  This isn’t a single suit you put on, it’s a way of being in art that develops over time and work.

yikes! this is getting way too long!   If you have been, thanks for reading! and do please keep the comments coming!! thank you.   Elizabeth

Posted by Elizabeth Barton at 11:29 AM

Actually, I wanted to thank you for going into such great depth in your discussion of working in a series! It gave me a lot to think about. I have been making art quilts for about 6 years now and wondering how people know when they look at my work that it is mine. Usually, I get a lot more ideas than I have time to act upon. So, really, it's the idea that screams the loudest (if that makes sense), that gets done. I suppose it might just be a different way of working than working in a series...nonetheless, you have planted a seed. Thanks for sharing your thoughts.

Hi, I found your Blog through the FFFC Fast Friday challenge group. I wanted to understand what was meant by a "series". Your blog was very helpful and specific. I was also interested to know that judges were looking for series or a related body of work that focused on a specific area....of development. thank you for taking the time to share. Donna from Sea Ranch.