Only 8 days away in New York City, and I feel like I have 3 months of catching up! which is difficult because in 2 weeks I’m going off to Scotland for a month….a very different kind of visual stimulation from the city.

I saw so much wonderful, amazing, provocative, inventive, thought-provoking and intelligent art on this last trip to NYC, I feel as if I have mounds of boxes of delicious chocolates to explore for many months. But – to switch metaphors in midstream – you have to take it slowly….gradually parsing over each visual memory to see what can be learned and absorbed. I began the trip with The Third Mind at the Guggenheim: an exhibition of 20th century American art that reflects Asian art, literature, and philosophy – particularly philosophy. There were several pieces about letting things happen – letting nature take a course and observing the results. e.g. sitting in a small cage-like room (Tehching Hsieh) and clocking in on a time clock cum camera for a year – every hour! You observe hair growing, fatigue setting in, small shifts of posture – but at the same time this is presented in a flickering movie that gives the opposite effect of a slightly frantic ant!! I can’t imagine feeling calm if I had to clock in on the hour for a year…. so I think “frantic ant” definitely expresses the feeling I would have, not Zen-like calm!

Ann Hamilton had a little fluttering miniature ski lift that swooped down the inner spiral which was also disturbing in its haste to get to the bottom. One of the most interesting pieces was by a soldier (Kim Jones) who had drawn battle plans obsessively creating patterns of people and materiel connected with the Iraq war. A tight pattern but a chilling one…and a good one to remember if a quilting design were needed in a piece about war.

After the Guggenheim we walked across Central Park – the park (designed by Frederick Olmstead in the mid 19th century) such a brilliant idea and one that is bittersweet because I can’t imagine anyone devoting that many acres to pleasure for all city goers today. The magnolias were so beautiful, like an Impressionist painting and people were picnicking, and having watercolour painting lessons and rowing boats!! 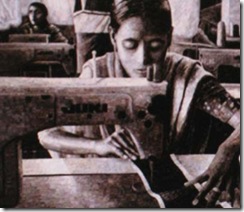 We visited the Museum of Art and Design show Second Lives: Remixing the Ordinary. This show was about using recycled or unexpected items to make hangings and sculptures. The most striking was a beautifully made and sad banner about garment sweatshops – made from tens of thousands of clothing labels by Terese Agnew. Yes!! it’s all labels!! If you go to the above website there is a large photograph by Peter DiAntoni that you can zoom in on to see the labels. 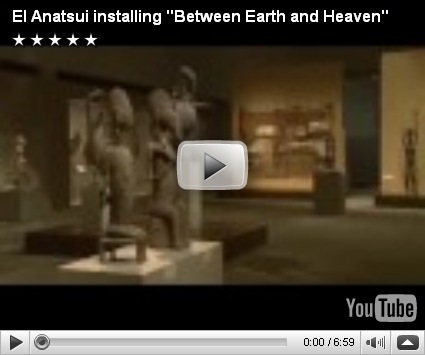 We also saw one of El Anatsui’s large “curtain” wall hangings. These are made of thousands of metal strips cut from the tops of liquor bottles. They are wired together by him and his assistants – of whom 20 might turn up to help him! When the piece has grown to the right size (usually very large – 10 feet or so high, 20 or 30 ft wide) El Anatsui arranges it on the museum wall, gathering it into folds (which are then tacked into place) to give it drape and presence – also the metal tags then glow and flicker as they catch the light. Here’s a video of the installation he made at the Met last year:

Regina Benson has also used curving and folding and bulging her works on the wall; she uses a metal armature to hold the piece in a given shape. 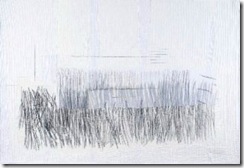 More quiltmakers seem to be doing the opposite, however: stretching their work so that it is less textile in appearance. We saw a solo show by Jeanne Butler at the Noho gallery in which all the work was stretched flat and tight in a very painterly manner.

Jeanne works back into a heavily quilted white on white background, adding drawing, sheers and now torn brown paper to create ethereal abstract work. Jeanne’s wasn’t the only solo quilt show in town, however – Paula Nadelstern has a prestigious solo show of her amazing kaleidoscope quilts at the Museum of Folk Art. Paula’s show is up through September, Jeanne’s for another 3 weeks. Both Paula and Jeanne achieve great harmony and elegance in their work – and by very different means: Jeanne’s quilts are quite spare and restrained in their use of both colour and form, Paula’s are adazzle with glittering shards of fabric, the designs taken from the kaleidoscopes she loves. Each has followed and refined her voice for many years….putting in the 10,000 hours!

More- later in the week – as I catch up with myself!

If you have been, thanks for reading! Elizabeth

Posted by Elizabeth Barton at 12:49 PM

I always enjoy visiting and reading. So much to think about in terms of your feature on museum and art exhibits. Even one exhibit would absorb careful time and thought. I feel like I just vicariously toured NYC with you.

An amazing video, I enjoyed it so much thank you for sharing your New York adventure.

Saw the MAD exhibit as well. Loved the quilt and a number of other pieces as well. Must confess that I didn't "get" about a third of the exhibit, despite the artist statements and curator remarks that accompanied each piece. Made for good conversation on the drive home.