Elements and Principles:line and texture

Line is not used much in the art quilt world as a predominant element though its secondary value is significant. In traditional whole cloth quilts, line is created by the quilting stitch. The stitched line also creates texture of course. Surface design techniques can create line too. Line is a more delicate element and, I think, is more appropriately used in a smaller format – where the viewer is drawn close to the work. When does a line become a shape and vice versa? I think a shape should be considered a line when it’s so thin as to be one dimensional….so even though I’ve used very skinny shapes in many of the black and white series of quilts – I do think they’re shapes not lines!! 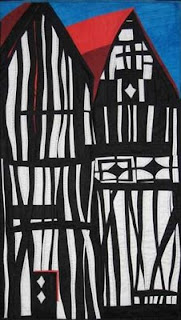 I have experimented with a very bold line in the piece that’s going to be in this next Quilt National – trying to make the line really stand out – here’s a detail. 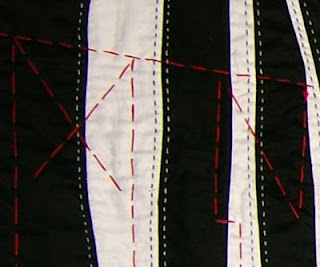 Texture in quilts is seen as the pattern on the cloth where the shapes are generally so small…they are considered more as a surface variation. If texture is a dominant element, then the other elements should be somewhat subdued. I think you have to be careful though because using texture might lead technique to predominate rather than the overall design. I’ve run into this problem with my drowned city series of quilts. 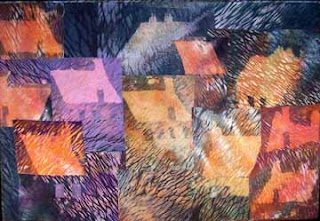 I’ve found that the shibori texture is so strong, you really have to let it be the dominant element. Trying to use it very occasionally within a piece is extremely difficult as it stand out so much. You have to balance it very thoughtfully. 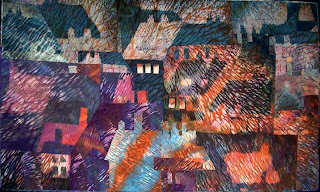 What I found worked best was to have all the fabric shibori patterned, but some of it with a very low contrast of values, and some much higher contrast.

It was also difficult to get shibori pieces into shows because I’ve found that jurors either like shibori or don’t! one judge dismissed a piece as “too much shibori!”. 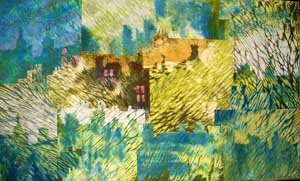 Of course for us shibori lovers, there can never be too much shibori!!!

I’ve always admired Jan Myers-Newbury's, Sylvia Einstein’s and Nancy Halpern’s quilts and they love to use highly patterned fabrics in a multitude of textures. If you notice they are successful because they allow the texture to totally predominate and not fight other design elements. If they added in strong, solidly or boldly coloured shapes, the compositions would not work as well.

Overall, it's important to think and plan carefully, choose the element you wish to predominate, don’t have a battle of the elements!


Posted by Elizabeth Barton at 8:42 AM

I love the way you illustrate the points that you teach. Lovely art quilts and wonderful information. Very inspiring.

In this post you say: "Texture in quilts is seen as the pattern on the cloth where the shapes are generally so small…they are considered more as a surface variation. If texture is a dominant element, then the other elements should be somewhat subdued"
I may have misunderstood this but are you only talking about visual texture (which to me shibory and all patterns are) or are you talking about texture in general? I'm wondering if you can't make texture become the background and a void become the focal point whether or not you make that subdued or in your face. I'm not sure I'm explaining this very well but say you create a background from beige/sandy fabrics, pin tuck them in wavy lines but create areas where the tucks have different angles and thereby create shoe prints, next you appliqué a pair of dark red shoes where the prints end and then after the shoes have prints of bare feet. This way the red shoes will not exactly be a subdued feature and the real and visual texture will remain a background.
Shibory prints for me have a certain rhythm to them especially the higher contrast ones and that rhythm in my eyes can provide an excellent background for very defined elements. Maybe I have lost the plot here, (that's actually very likely), so if that's the case I apologise. I'm trying to learn and indeed remember all the gold nuggets you are patiently imparting at regular intervals. Thank you

Texture could indeed be the background - especially if it were soft and low key - but if it were high contrast and bold then it might battle with other bold elements. which would be fine if that was what the piece was about: the battle of the elements!! if you want the footprints to stand out though, I think you'd soften the texture at that point. and yes by texture I'm indicating both pattern and the physical texture you can achieve on quilts - if they're not overly flattened with glue!!! (my pet hate!)