Off to England and Scotland! 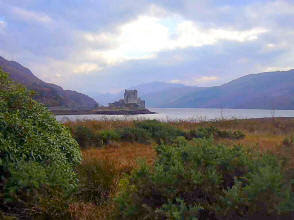 I’m going “back home” for a couple of weeks – flying into later today (well, tomorrow actually) and then driving up to visit my brother in law in West Linton, just outside of .
I want to go upto North West Scotland which all the guidebooks say is “the most beautiful part” and see some scenery – maybe get new Inspiration!! As long as the fog holds off.
I just read a light but delicious book by Alexander McCall Smith called “The Right Attitude to Rain” – about life in . So I’ll have to remember that! MCall Smith, JK Rowling and Ian Rankin all live in the same area of – some wag called it the “writers’ block”!!

I hope to get into to the Scottish contemporary art museum.

There’s a show of work by “bad girl” Tracey Emin who makes quilts (among other things) with bold statements appliquéd on them; they warn you: “A unique chance to see the first major retrospective of one of Britain’s most celebrated and controversial artists.This show contains works of an explicit nature.” !!! - well, we’ll see!

It will definitely be different from what you see at the latest guild show, or even Quilt National, that’s for sure!

After , we’re headed down to Sutton Coldfield to Great Aunt Dorothy – affectionately know as "gee ay dee" - and definitely a walk or two round the beautiful park that King Henry VIII gave Sutton. Can you imagine a head of state today visiting your town and giving the town a park?? Wouldn’t that be amazing?

And after Sutton, we’re going to visit artist friends of mine in Dewsbury – they live right by the a really great place to visit with Henry Moore statues in the sheep meadows and Anthony Gorman men in the woods!! Last time we were there we also saw some wonderful silver prints by Rachel Whiteread. This time we’ll see work by Moore, Goldsworthy, Turrell, Noguchi and loads of other folk!! Much it by walking around in a gorgeous park – probably in the pouring rain, but we’ll have the right attitude!!

The following day we’re going to visit Elizabeth Brimelow – she’s in my top 5 of favorite quilt makers. She made the famous piece (a detail of which is below) that the quilt museum now owns. 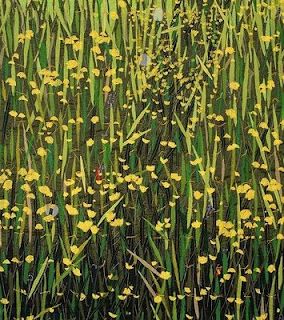 And then we’re going to the Lowry gallery of course! A painter well known in England but rarely mentioned here. I had the privilege of hanging next to him in a gallery in the south of England last year – sadly didn’t get there – but here’s a picture – you can sort of see it!!! I have 2 small quilts on the wall facing you, and one on the right side next to the Lowry. 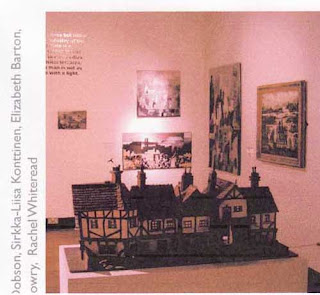 My last day in , I’m going to my home town – York – where they’ve opening the new national just around the corner from where my parents had a shop in which I worked as a teenager! I was the worst teenage hairdresser in the world, good job I turned to quilting!

Finally I’ll be flying home 2 weeks today. I’ll not be blogging during these two weeks so be sure to check back when I get home as I hope to have some photos and comments on the art I’ve seen. Maybe even some adventures if I’m lucky!

And if you have been, thanks for reading.

Posted by Elizabeth Barton at 8:13 AM