Back from teaching in Ohio

I had a great week teaching in Ohio.  There were 24 people in the class and each one had a different vision as to what they wanted to achieve and the results were excitingly varied, fresh and inspiring!  Over this week, I’ll post some of their pieces before I head on out again! 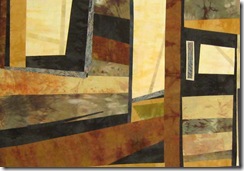 I’ve never had anyone work from a photograph of an interior before and this piece by Janet worked wonderfully well.  It’s so good to see someone tackle different imagery and in such an imaginative way.  She also had several more pieces designed from her photos of interiors. 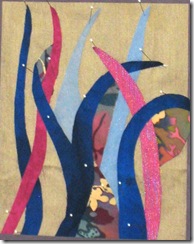 Diane got two pieces all pinned together.  The colour choices on the one above – based on a photograph of raindrops on waterlily leaves – are jewel like.  The little white dots are pin heads (oh that they would make sets of pins with black heads!) so please disregard those.  Her other piece is based on grasses.  Each piece has a lovely flow to it.

Alice also made two pieces, the one on the left was completely finished right down to the sleeve!  Her inspiration was the holes left in her hostas by night time chewing critters…tracked down in the dark by Alice with camera and flashlight!!  A great detective story!

Alice used a soft green taffeta that shimmered with different shades and gave an eerie night time glow to her pieces which was immensely effective. 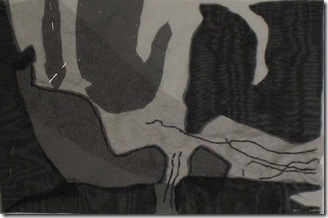 I love the mystery  that is in Lee’s piece.  This is  based on a photograph of people standing in a shrub strewn desert…the layers are built up with organza and outlined with black stitching…Lee plans more stitch mark making.  This piece has such delicacy and a wonderful use of positive and negative space – and is a beautiful abstraction from the original picture.

Betty plans to put an apple tree with bright red apples in front of this moody rich landscape…the picture doesn’t really do justice to the depth that Betty achieved with all the layering of the different blues and copper tones.  The piece was so rich and satisfying in itself, I tried to persuade her to do another one for the apple tree!!  She diplomatically did not tell me of her final decision!!! 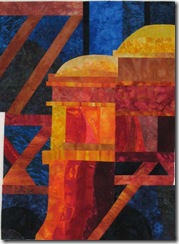 Linda’s gate houses  glow: her colours are so strong and warm.  She has boldly juxtaposed round against dynamic angled shapes which conveys the complex character of her original photo.   This piece is rich and robust and has amazing power.  Gorgeous use of shades and tones. 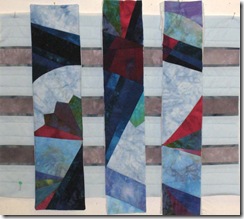 Cathy made a very complex 4 part piece based on imagery from a trip to the Middle East.  I love the sense of the wide expanse of desert contrasted with the detailed stained glass from a church window in Bethlehem. This is a unique solution to conveying beautifully two very different impressions of the places she visited. 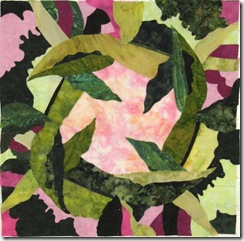 Liz told a story of a polk weed whose progress from seedling to giant plan she photographed meticulously while apparently carrying out her office duties!!  You can find great inspiration anywhere!  this fellow was growing up by a dumpster and now its image (manipulated and repeated) makes a wonderful quilt.  Liz’s use of positive and negative space is masterly; there’s not a dull shape in the whole quilt.  And you can really see the polk weed reaching up and up into the sky!

More in my next post!!  Aren’t they super? and so varied – I just love it.  The class was called Inspiration to Fulfillment and was about creating strong and dynamic designs based on photographs that the students had found inspirational.

If you have been, thanks for reading!!!  and thank you very much to all the ladies in the class who worked so hard, and gave me permission to photograph and blog about their work.      Elizabeth

Posted by Elizabeth Barton at 7:00 AM

When are you coming again to western Canada? I hope soon... this post has me itching to take another class from you!

Elizabeth, thanks for the opportunity to share my art. I loved the class, your sense of humor and most of all, your guidance and teaching skills. Hope to try again soon. jANET w

From what I have seen of the work in the two blog posts I sure wish I had been able to take this class. And I really missed seeing everyone!!!