Thought for the day… 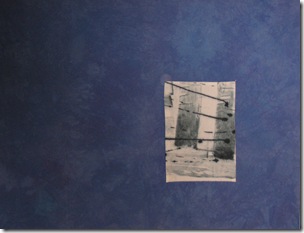 It is very hard to sit and really think… as psychologists (and many others!) have discovered.  If given a choice between a task that involves hard thinking and one that does not require it, nearly everyone will choose the latter.   Such mental “laziness” has been around for a while: 18th century British portrait painter Joshua Reynolds stated:  There is no expedient to which a man will not resort to avoid the real labour of thinking”.

It’s actually pretty scary to realise this, since our ability to think has long been touted as one of the attributes that differentiates us from a worm!  Psychologists suggest that it is because we prefer the familiar (i.e. predictable) to the unfamiliar.  This certainly seems to be true in art  with more approachable and familiar works being the ones accepted into shows at every level from the local art center to the great museums of New York. (there was an article in the NYT recently about how the big museums are choosing the old predictable crowd gathering artists to exhibit).

Of course, as usual, advertisers have exploited this concept long before the rest of us really thought about it! (after all thinking is hard, right?).   If you listen to ads (and don’t do it for long!), you will notice just how often things are described as being easy, quick, simple.   I don’t think there’s a quilting magazine on the racks that does not have one of those words somewhere on its cover!!  to say nothing of the dieting and beauty magazines!! And the politicians always seem to get more votes if they offer simple easy solutions: my way of fixing this will not hurt, you will not have to make any effort, vote for me!

We are all hardwired, say the psychologists, to look for easy answers  - perhaps because of our caveman roots!!   the trouble is, that if we slip slide into this we will go round in circles because they are oh so familiarly comforting!  so..now I’d better get into the studio and do some Long Hard Thinking to try to figure out the solution the the problem I set myself  in the above picture!!

and, if you have been, thanks for reading!  Elizabeth
PS ALL comments most gratefully received – and if you have to think about it, all the better!

Posted by Elizabeth Barton at 6:28 AM

How good it feels to make progress because of thinking and hard work and persistence!

Maybe this is why people like to lean toward the intuitive....the answer is just there....no thinking.

The cognitive fluency studies are both revealing and horribly scary - do we then prefer to listen to (and subsequently vote for) those who offer us easy options, whose speeches are simple and easy to follow. is this also why tv shows seem to get more and more simplistic - because we are always preferring the easier route. Let's challenge ourselves to think in every arena!!!

WOW: I love your comment right here...and this post is great! As Terry suggests: I do lean toward the intuitive....it is just so much easier. But I am slowly learning the whys, and it is good!

You are SO right! I'll even do housework to avoid the hard yards of working/thinking persistently at a design! But certainly for me, becoming more aware of my personal avoidance strategies helps make me stay focussed for longer.

Thanks for making me think today. . . . now, back to the hard work!

I loved the comment that thinking differentiates us from the worm! If that is not a motivator I do not know what would be. :)