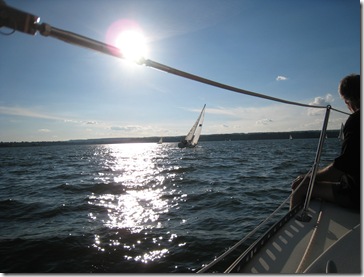 I had so many fascinating comments on the Intuition post, plus Terry Jarrard-Dimond’s  thoughtful blog today, that I thought the topic worthy of further cogitation, if not agitation!

There have been studies  on intuitive behaviour, e.g. that shown by the police when they talk about “a hunch”, or a rock climber “intiutively” picking the best route.  They show that while at the time of making the quick decision they might not have been able to consciously state what that decision was based upon, when they were asked to think it through slowly afterwards they could recall the experiences they’d had in the past that were similar and thus had lead them to the behavioural choice they made.

Perhaps one way to learn how to be more intuitive  would be to experience many situations similar to the ones where you want the behaviour to appear quickly, effortlessly and apparently unconsciously.  Of course this is the kind of training used in many fields.  I don’t quite know why in art one would expect to be able to be a sensitive and efficacious artist without training.  Perhaps because in the latter part of the twentieth century there was a movement in art schools to throw out some rather stiff and rigid training practices.  But, they threw that poor baby out with the bathwater!  You will not have the intuition to perform a skilful act without having had the training.

I teach design, composition, color, developing inspiration, motivation and techniques of construction/quilting etc and now,I’m wondering, can one teach intuition? For intuition  is  not  a gift one is born with (despite Jung!), or  that if you put on the right music and smoke funny ciggies you’ll get “in touch” with!!  Of course that doesn’t mean people havn’t tried!!!
Nor is intuition a  specific body of knowledge, but rather how you use that body of knowledge.

Basically I think there are two kinds of activity in art :
first: artistic activity that is a performance of something learned over and over until it becomes unconscious…until a motor memory has been established, in the fingers or the feet or whatever organ is involved!  Like a piano or dance recital.
second: artistic activity that is a response to a stimulus and leads to the creation of something new. (e.g. choreography, music composition, painting, art quilts).
I think intuition might play more of a role in the first, than in the second kind.

Where does one begin creating, for example, a musical composition?  It is almost always from a stimulus – this might be something tangible like the wind (think of Vaughn-Williams Sinfonia Antarctica or Mendelsohn’s Fingal’s Cave)…or it might be a brief snatch of melody overheard in the street, or created when running one’s fingers up and down the keys…it might be everyday sounds like Philip Glass’s “hum of the refrigerator”.

Intuition is not actually involved with the genesis of the idea: the genesis is a tangible stimulus (as above), or perhaps a thought, like wanting to make a piece about a certain event, situation or mood.  Intuition plays a role rather in the solving of the problem of turning the stimulus into an art form.


In tackling a problem like this 3 levels of technique need  to  be learnt:
A: the techniques involved in developing designs from the bowl of cherries

B: the techniques involved in making a strong composition from those designs.

Once the students had mastered working from small fixed concrete examples like this, then you could expand to more complex ones, say a larger still life where they had to “find” the part of the still life that was really intriguing to them.  Then you could go to larger visual experiences, e.g. seeing a barn dismantled , and  finally to abstract examples like a specific mood or feeling, or an element like a certain shape, type of line, colour etc.  ( I do think working from an element is one of the harder starting points which is why I wonder why so many folk begin a piece “with the fabric” – the fabric after all is  but a texture or a colour..an abstract element.)

The more experiences you have  had like this, especially in step by step examples with a good teacher and good feedback, the more likely it is that you could develop your own “intuition” as to what would work best in each of these steps.

I don’t think, though,  that at any point one should try to make a quilt (or a musical composition, or a dance) based on nothing!  Imagine saying to a choreographer, okay come up with a dance about nothing, from nothing, and saying nothing!! doesn’t make much sense does it?  I have never hear of art based on nothing.  Many great artists have said something equivalent to  “there is always a starting point”..  So, don’t ignore the Starting Point, the Main idea.

Interestingly, if one studies so-called “primitive” or “outsider” art, one learns that, as Terry says ,these artists have usually had a great deal of informal training and experience.  Furthermore, the interviews with the original Gees Bend quilters revealed a fine sense of how to make a piece balanced, unified and also interesting.  They were not hampered by trying to rigidly follow a pattern, trying to “get it right” according to some dry specifics as to what “right” is in quilting terms, instead they were making something beautiful and engaging and, yes, functional, from discarded fabric scraps.

And this right brain/left brain stuff?  well for one thing, it’s nothing like as binary an activity as that sounds!! The left brain is inclined to be more analytical: constantly evaluating and judging.   If you can slow down that activity, then  you can allow yourself  to freewheel through all possible solutions…but there will always come a point when those possibilities will have to be assessed.   So there is always a back and forth between the two types of cognitive activity.

I don’t think one would ever be hampered by knowing too much – so I don’t advocate quitting studying.   But you might be hampered by critiqueing yourself at the wrong stage in the artistic activity.   Remember I said I thought there were three different activities: design, composition and construction?  I think the start would be to put onself (literally or metaphorically – depending on the nature of the stimulus) in front of it, and then say okay I’ve got to come up with as many design ideas as possible.  So if your Main Idea was Dots, then just be as dotty as you can be!!!  Produce a plethora of points!

Then say…okay, now I have all these dotty ideas, I’ve got to move to the next stage: assess mode: which ones  look more promising?  How can I organize them into strong, fascinating compositions?  I want to come up with a lot of possible arrangements – free wheeling mode.    Then back into assess mode:   which compositions are working best, and how and why?  could I improve any of these?

I think it’s like so many things, you kind of walk your way through it over and over…knowing when to emphasize which skills (the free floating idea generating skills, or the analytical assessment skills).   At first it’s mechanical…and then it gradually begins to flow more.  But oh, it does take time!  so I won’t take up any more of it!

If you have been, thanks for reading!!   And thank you, Terry, for this “conversation”!
Elizabeth

Posted by Elizabeth Barton at 7:11 AM

Phew: that's a lot to process! I see that you are having a show at the White Tiger in April: I had lunch there Wednesday! Very cool place! I still hope to get with you at some point for some classes: perhaps when I win the lottery - and yes, I do buy tickets!

I do enjoy the critical analysis you bring to your blog posts.

Here's my thoughts on intuition, on an entirely different 'learned process'. I spent six years learning to wakeboard. Wakeboarding is similar to watersking, but instead it involves standing sideways on a single board, being pulled behind a boat.

I was determined to be a good wakeboarder, to look a natural behind the boat. Every Sunday, with a very good coach, well versed in able to explain technique and outcome. There is an easy feedback mechanism, if you fall off, you're doing it wrong.

But there are many ways of 'doing it right'. Some people look all wobbly, and some flow, just skimming across the water. I found I had to learn the basics. I first learnt to be pulled up on the board as the boat accelerated. I had to be concentrating intensly on doing everything right. Then I learnt to cross the wake and do little jumps. Each skill I learnt, required focusing on that particular moment. Repetition, repetition, repetition. At times I was discouraged... will I ever be able to say "I'm a wakeboarder"? Over time, I noticed that certain skills became automatic, getting up was easy, so was crossing the wake. I was enjoying doing fun things such as riding up high on the wake, turning fast, similar to surfing. This was when my intuition had kicked in, it was natural, easy.

I agree that we are born with certain natural instintive skills (hot stuff burns), but other skills need to be learned before they can come as naturally and easily as to be called "intuitive".

This is all quite fascinating and I tend to agree with all you say. Art about "nothing" is usually pretty uninteresting if it is actually about nothing. I always find that problem-solving is my most creative mode. I also think "intuition" has a lot to do with how generally observant a person is. A lot of useful information can be absorbed and filed away, even unconsciously, if you are attuned to your surroundings.

Thank you for continuing to provide such thoughtful and stimulating blog entries.