Of course we went to (probably) the most famous fabric shop in the world!  Mood.
Mood is 3 floors of gorgeous fabric and is often featured in the reality show Project Runway...with Tim Gunn. Alas, we did not see Swatch - the famous Mood dog  - we were told it was his day off!!

But we did drool over some fabulous fabric: 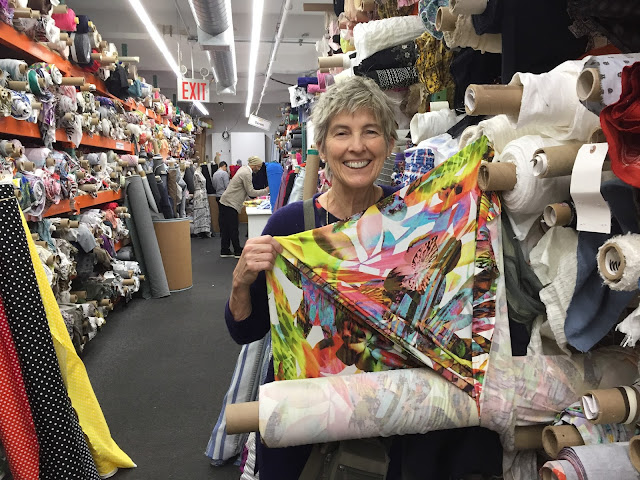 yes I bought 3 yards of it...and some of the bright yellow polka dot in the bottom left....but not for quilts.  I find it really difficult to mix commercial and "hand-dyed " fabrics in a quilt.  I also like the idea that I designed the fabric for the quilt as well well designed the quilt...
but I'm hoping I'll look pretty snazzy in a tunic made of the Italian rayon knit I'm holding up!

The highlight of the trip, however, was a visit to the new Whitney ARt Museum...now down in the old meatpacking district...very close to the Hudson river.  The location and views are tremendous. 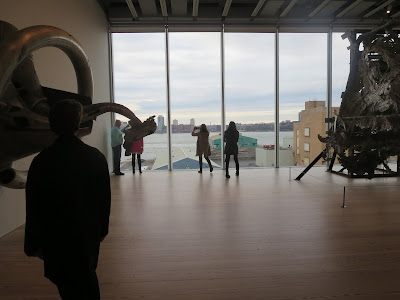 I was very inspired by the Frank Stella retrospective show - lots of wonderful ideas that could be a starting point for abstract quilt design. 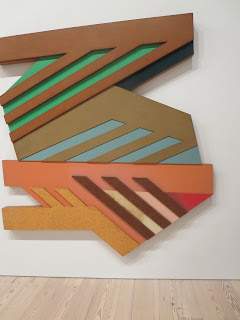 Just look at these: 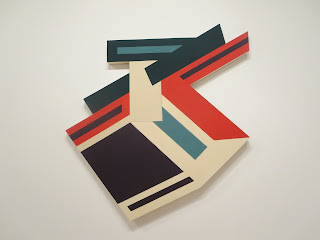 The wall texts were some of the best I've ever read, really informative of the artist's process.
Stella said about  working in series:
"In the Protractor pictures I had been as loose as I could get within a system that I'd kept to for over ten years.  Imposing that discipline on myself endowed all the early work with both benefits and drawbacks." 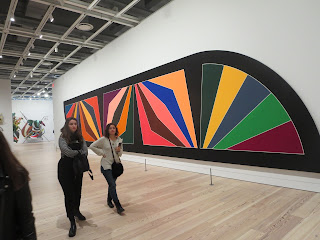 The Protractor series (that's one above: "The Damascus Gate")  was "rigorously conceived".  STella laid down clear parameters for himself involving the use of the protractor shape and some of its implied angles.  He was able to design 31 variations on this shape.  The curator wrote that this extremely systematic approach (which was during some of STella's early formative years as an artist) led to Stella thinking about his compositions as problem solving exercises.  Setting strict limits actually allowed greater creativity.  If you say to yourself "how many ways can I vary these few formal elements",  you can see how setting limits can force you into being very creative.  In the same way that a cook might have only the same few ingredients with which to make a meal on 7 consecutive nights - if they want people to enjoy the meals - they'd come up with 7 very different ways of preparing those ingredients!

As time went on Stella continued to work in series...one of the ones he set himself was to make one painting for each of the 135 chapters of Moby Dick!   Think of your favorite book and what you could do!!!

And, if you have been, thanks for reading!!!  Enjoy the winter holidays - "winter" (in inverted commas) indeed - it's forecast for 77 here, a mere 30 degrees above "normal".  Which I hope is going to be a bit of a challenge to all those flat-earthers out there!!!  But you never know.....happy holidays anyway!      See you in the New Year!         Elizabeth
Posted by Elizabeth Barton at 3:35 PM

Happy holidays indeed. I also find mixing commercial and hand dyes, including Batiks, challenging. Great post for new year challenges. More people should realize that limits actually are freeing. And not in creative endeavours! All the best in the year to come. I DO read read and follow along regularly! :)

I find I'm always more creative when I run into a problem. I'm going to try to use restrictions as a starting point. Season's Greetings to you Elizabeth.

Thank you Elle and Laceflower!! And all best wishes for next for you too: health, energy and creativity! Elizabeth

Happy holidays to you too Elizabeth. I've been enjoying your blog now for a couple of months since starting a city and guilds course in machine embroidery. I would love to take one of your courses and will in the future but one course, full time job and two grandchildren are keeping me on my toes at present! Thanks for all your great inspirational tips and knowledge though.

good point Kim! there are certainly some gorgeous fabrics at Mood....I know this is a problem for many, so a few study pieces perhaps...though it's a little like combining a Chopin nocturne with a Scott Joplin rag!

Thank you Jacky O - it's always good to have some new activity "saved" up for when there is more time...I have a few things in that category myself!

The Italian rayon knit fabric looks interesting - I do hope you post a photo of the tunic you make with it!

I bought two lengths of it - it came in several different patterns and colors, gorgeous stuff!! have made one tunic so far...now working on a yellow polka dot circle skirt !!