Abstraction? Representation? The truth? or not.......

A few weeks ago I was teaching a workshop in Oregon and asked the students in the class to give me some topics for my blog – sometimes the pump does need priming!  Well they came up with several ideas upon which I will gradually cogitate…and record herewith my various cogitations!

One question took my eye:  “is it okay to be somewhat representational?  How abstract does “abstract” have to be?

There is no clear cut single definition of abstract art – the term can mean anything from totally non-objective, derived from a mathematical formula, to simply abstracting a section of a scene (whether it be figurative, landscape or still life) and manipulating the shapes and lines and values to create a great design.  Many painters (including Picasso) have pointed out that in a sense all art is abstract since it’s not “the real thing” – except, I suppose, Duchamp’s “Fountain” which, of course, wasn’t ….
Here is the link to the image:
http://www.tate.org.uk/art/images/work/T/T07/T07573_10.jpg
in case you don’t know the piece.  I do wish it were okay to just show the image on the blog…but some of these places are fussy and litigious these days that even an image that is being used in a totally educative “fair use” way can now suddenly lead to an invoice.  And of course it’s NOT the original artist that would get the loot, but rather the photographer of the art work – or, even more likely, the agency that bought up the rights to the photographs!  But I don’t want to get into ranting!!

Many painters and psychologists have also pointed out that while probably have rearranged and modified (from the original) any visual images that we create, they have actually come from somewhere.  Everything is inspired by something – the images we put together may come from a movie we saw last night, or from a book we read as a child but there is always a starting point.

So abstract doesn’t have to be all that abstract to be abstract – or abstracted from.  Like fashion nowadays or rather, the lack thereof anywhere away from a fashion center like NYC(!), anything goes!

But the question also implies that maybe representational art is no longer acceptable…..
And that is a valid possibility.  I would say that while the public at large has always preferred to buy (more or less) representational art for a domestic setting, the critics and the curators do seem to swing from Abstract being in and Representational out to the other way round – like those old weather indicators with little people that came in and out according to whether it would be fair or not – you couldn’t have them both at the same time.     Abstract art has had a huge revival in the last few years starting with a big retrospective at MOMA in NYC a couple of years ago and a more recent exhibition a year ago called Inventing Abstraction 1910-1925 about which they wrote:
“In 1912, in several European cities, a handful of artists—Vasily Kandinsky, Frantisek Kupka, Francis Picabia, and Robert Delaunay—presented the first abstract pictures to the public. [This show] celebrates the centennial of this bold new type of artwork, tracing the development of abstraction as it moved through a network of modern artists, from Marsden Hartley and Marcel Duchamp to Piet Mondrian and Kazimir Malevich, sweeping across nations and across media.”

It’s always been okay to produce representational art, since abstraction was “invented” it too has continued to be popular and re-invented with several different “movements” over and over.    With exhibitions like those at MOMA and many other museums, we’re now at a place where we can begin to asses which abstract pieces will stand the test of time and which will be more stepping stones in the development of the art form. 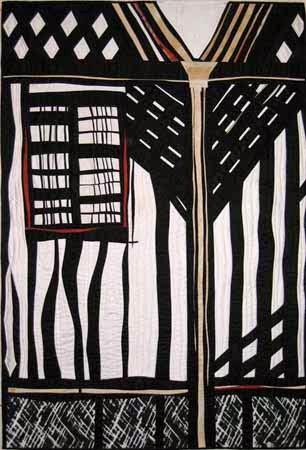 Within the quilt world, of course, abstract was always “in” – especially with pieced work. Since the 1980s there has been a huge resurgence of quilting and many people begin their quilting careers with traditional pieced patterns and then move onto create their own patterns and images.  I think the advent of fusing techniques has really encouraged much more representational work.  Fusing makes  representational work much easier – it’s very difficult to be very representational with piecing unless one really fractures the image to a very complicated extent and, in a way, those images are then more abstracted anyway.

I do think there seems to be something of a dichotomy right now in the quilt world as to styles and not between traditional and art quilts but rather it’s a dichotomy over technique:  there is one school of people who feel that only piecing is truly acceptable (and it’s easier to piece abstract work than it is to piece representational work).  They feel that fusing techniques should probably be considered as fiber collage rather than quilting and they definitely look down their noses at representational work!  Other quilters feel that any techniques that involve putting together pieces of fabric in any way together with some stitching qualify that work as a quilt.      And if you get jurors or curators that do have a strong bias one way or the other, obviously the show they put together will reflect that.

I am much more of a mind with Ellington who said that there are only two kinds of music: good music, and the rest.  If the piece is strong and beautiful and worthy of being looked at and made of fiber then it’s good quilt art , if it’s a boring or ugly mess – then it’s not.

And another good quote which is very apposite to this blog - this time from Matisse::
“Never ruin a good [piece of art] with the truth.”

Please do weigh in with your comments!!!  All comments are delightfully beheld by this blogger!   And, if you have been, thanks for reading!  Elizabeth

And now for a nice cuppa tea……
Posted by Elizabeth Barton at 1:09 PM

The latest SAQA Journal has article by Robert Shaw where he quotes Duke Ellington: There are only two kinds of music...good music, and the other kind. So enjoy your lessons!

Interesting post, Elizabeth. I don't understand the ending quote by Matisse, though. Could you share your thoughts on this?

Thank you Linda - I actually read it in a book about music and wondered why I couldn't find the quote in my art books!!! (I've changed it to Ellington).

Kristin: I think what Matisse meant was don't be too literal in making a painting - or an art quilt (if he'd thought of it!) from a particular landscape. The important thing is that the art be GOOD and not necessarily totally a true representation of the subject. You see this in model photos where the models spots and acne has been air brushed out!

I hate to disagree with smart Elizabeth but I believe that Ellington liked all kinds of music. He was suggesting as had some painters and many musicians...that all styles were legitimate...jazz, classical, country and surreal, abstract, realistic, impressionistic. An expression may be good art or bad art...It doesn't have to do with the kind or style of art it is.You see or hear good art and you recognize it.