Practical Matters: Pricing and Scanning, and the Drink of the Gods.

I know I often witter on about more philosophical or esoteric points such as composition, cogitation or combustability (rarely spontaneous!) but, let’s face it, much of art is related to practical matters of which recently pricing and scanning (not necessarily in that order and not really connected, except both being part of the substructure of art) have recently been of concern.

Scanning
I had to retrieve images of some older work and discovered how poor some of my original slides were!  Some due to the deterioration of age, others due to (what looked like) drunken camera work from the outset!  They tell us that most media have a shelf life and that we’ll need to continually shift our images from one medium to another as time goes by.  And it’s true.  My slides from the early 90s despite being boxed up, with only rare excursions to be seen (and rejected  - though occasionally, delightfully (if hopefully is now acceptable surely delightfully must be too!) accepted by jurors across the country), have definitely deterioriated.  They’re shifting into the  sepia mode of old age, gradually fading away. Old slides don’t die they just seep away.  (sorry! love bad puns).

However…thanks to Photoshop (and I’m sure most other photo imaging software) one is able to make considerable corrections to old images.  Here are a couple I’ve found particularly useful:

My scanned in image of an early Windows quilt looked like this: 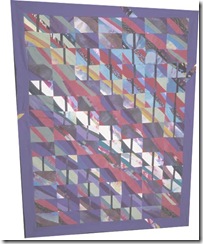 You can see how that drunken camerawoman must have not had the camera lined up either horizontally or vertically with the center of the quilt.

Also there has been a considerable loss of color and of contrast.

this puts a nice grid over the whole catastrophe: 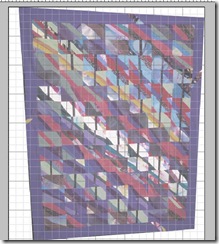 2. Then select the image: Control-A

( I couldn’t persuade the Print Screen to show this, alas)

what happens with Edit-Transform-Skew is that little boxes appear on the corners of the image.

4. Take the cursor (by whatever means possible! scruff of the neck if that’s all that works!), place it on one of the little boxes  and pull out the image one corner at a time so that it lines up with the grid. It’s amazing! 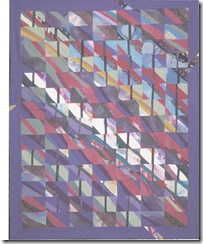 5. Apply the change – I usually just click on the rectangular marquee tool (the one at the top left of the main tool bar that looks like a rectangle), and it asks, very politely, “apply, madam?” (I’ve got a nice old fashioned version of PS) to which I agree.

6.  The next step is to saturate the color a little more:

a) Image-adjustments-hue/saturation.  Then move the little slider up or down to the level appropriate.  And hit OK.

b)Image-adjustments-brightness/contrast.  Again move the slider till the image appears as you remember the quilt.  And hit OK. 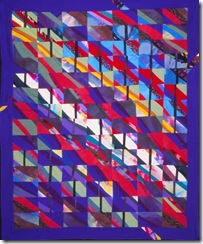 If I can, I like to pin the actual quilt up on the wall so I can keep looking from the monitor to the quilt as I work on it.

Looks a bit better, doesn’t it?

And in a few more years, I guess I’ll be shifting these images to some another new as yet unthought of mode of images storage.

Somebody asked me the other day how I price my work.  I arrived at the price by two different means and then took the average between the two.
Firstly, I took the price list from a quilt show I was in – a show of a group of artists of similar experience and quality.  I calculated everybody’s price per square foot (you can do it per square inch if that’s easier).  That gave me a range of prices.  I disregarded the prices commanded by a couple of egomaniacs with amazing connections (EWACs) who were way off the curve and calculated the mean psf.
Secondly, I made a note of all the time I spent working on the next quilt, from start to finish. I paid myself minimum wage.  To this  I added in the cost of the fabric, the dye, thread, needles and a modest amount of electricity, water and a very small amount of money for the infrastructure of the various machines I used.  Then I added in the gallery or agent commission.

Very interestingly the two figures were about the same. This was ten years ago – the figure was about $150 psf.

When times are good, and one is selling work, they say you should increase your prices about 10% a year.  I think, like most artists (and sales people), I’ve found that when the economy is stalling you’ll need to either hold steady or even decrease.  There is a myth that, if a work doesn’t sell, doubling the price will increase its desirability – well this may work for Any Warhol, but not I think for most ordinary folk!!  If a work doesn’t sell there are a number of reasons why but not, I feel, that the price is too low!

Well…time for a cuppa tea – enough of practical matters!  The drink of the gods (yes, they drink tea!) is the next important thing.
And, if you have been, thanks for reading!  And – commenting!  Have at it!  Elizabeth

Posted by Elizabeth Barton at 6:13 AM

Thanks for posting about Photoshop. I have often lamented my "drunken photographer" shots!!!!

"...egomaniacs with amazing connections (EWACs) who were way off the curve..."

I am SO stealing that acronym. Many thank yous.

Instead of Edit-Transform-Skew you can use Control + T, which adds "handles".