At the recent SAQA/SDA conference in Philadelphia, I moderated a panel of three artists Dominie Nash, Emily Richardson and Lorraine Glessner who each discussed their development as artists outlining some of the major influences and key experiences of their career. 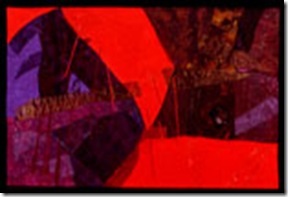 I was very struck by Dominie’s presentation and asked her permission to reproduce it here.  She was originally a weaver but has been making quilts for a long time now.  When we first met, at Quilt  National in 1995, she was working on her Peculiar Poetry series, subsequent series have included Red Landscapes (example above), Stills From a Life (example below) and her new Big Leaf series.

Here is her presentation from the April 2012 SAQA/SDA conference:

“I go to my studio every day because the angel might be there. What if I didn’t go and the angel came?”Philip Guston

I do try to go to my studio every day. It is a place where I need to be.

If anyone had told me when I was young that I would be talking about my career as an artist, I would have been incredulous. I had been following an academic path that others had put me on, as a dutiful daughter/woman/student of that day, and my art teachers had made it clear that there wasn’t much point in continuing my studies in that field. I didn’t know there was anything to art but drawing and painting, and all the works of art I saw at the Art institute of Chicago couldn’t have been done by mere mortals, and untalented ones at that. That I could parlay my longtime interests in working with fabric, thread and yarn in domestic ways into a lifelong passion to create useless objects and figure out with fascination the next problem to challenge me, was a life-changing surprise. Through fortunate circumstances I have been able to do this every day in my studio for many years, failing as often as succeeding but always striving to reach the next level. This is my job.

I began as most people do, whether formally trained or not, in an unfocused way, trying a little of this and a little of that ,until finally motivated to eliminate one technique or style after another and zero in on what really seemed to express my voice. I still take side paths to what seems at the time a brilliant idea but then don’t engage me enough to develop those ideas further than a few works. My studio storage area gives evidence of all this meandering in the endless piles of work, some of which has been cut up and reconfigured, some given away, and the rest languishing in wait for my retrospective. When I finally figured out a way to create a complex surface without piecing or traditional appliqué, and pursued learning and using many surface design techniques, there seemed no limits to what I could do (except for a failure of imagination during those all too familiar blank periods that most artists suffer, accompanied by feelings such as “I will never make another good work, so I’d better go out and get a job, except that I have no qualifications for doing anything else—I should have listened to my mother and finished my PhD” Constants throughout this by no means straight-line journey have been a love of color, pattern, texture, leaves and landscape, layers, architectural details, and patching/collaging to achieve a surface satisfying to me. I also strive to evoke a sense of mystery, to create work that makes the viewer want to return, where everything isn’t visible at first glance. I didn’t consciously try to figure out what my voice is or should be, but when I look back on what I’ve done, I see those constants appearing and reappearing:interest in cropping out details as the basis of a design,changes in scale and perspective ,sometimes in the same piece, became more apparent when I began to shift from abstraction to representation, but I think they were always there.

After my first random explorations, I have primarily worked in series, whether they comprise 4 pieces or 40. Pushing an idea in different directions and trying variations is an intriguing process for me. A viewer might not always see the consistency which makes a group of my works a series, but my imagery, thought process, and artistic concerns makes them a series in my mind. I never know how long a series will interest me, and I sometimes pick up an earlier series and continue it with new work, or work on several quite different ones simultaneously, as I am doing at present.

One of the important lessons of my informal education has been how much I have learned about color, composition and expressiveness from looking at work in other mediums than my own, especially painting and printmaking. I have also been influenced a great deal by the spirit and aesthetics of ethnic or folk textiles , especially those that are worn and patched, spontaneous and obsessive in detail.

I hope I’ve become more self-critical over the years. I remember being so thrilled when one of my ideas would come to life, but I had no idea that it was quite awful and thus was crushed when it was rejected. Possibly formal art training might have toughened me up sooner with all of its critiques, but in the end we are probably our own best critic. I am continually striving to avoid letting external validation or lack thereof determine the direction of my work. I aim to just keep doing the work, moving on to a new idea or direction only when I have given up on or lost interest in what I’ve been doing, and to avoid the danger to artistic growth and improvement of continuing to do what has been successful long after I have run out of interest or fresh solutions to the problem. Then it’s time for a new problem. Eventually, there is always a new problem. Though I’m rarely satisfied when I finish a piece, even if I am I feel a need to move forward and try again. The process is the most meaningful part. This is what being an artist is all about for me.

“Artists…realize that no solution is ever final, but that each new creative step points the way to the next artistic…problem.”    Anthony Storr

Thank you for reading Dominie’s elegant and witty writing – as elegant and as witty as her artwork!  do visit her website for more images.

Posted by Elizabeth Barton at 4:09 PM

So can I! Very interesting, thank you.

Thank you for this fascinating post. I saw her work at the San Jose Quilt Museum a few years ago and was intrigued. It's great to have a voice behind the images.

Thank you very much for sharing this wonderful piece and for publishing the earlier piece about the SAQA conference. It's all fascinating and much appreciated by those of us who couldn't attend.

I was at the conference and wished I could have been able to hear Dominie's talk again, since it had been an overwhelming weekend and my brain was in overload mode by Sunday morning. Thanks for granting my wish!