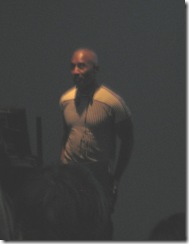 A couple of days ago I posted about the presentation that Nick Cave gave to the students at UGA this week..as well as showing us many pictures of his sound suits and tondos and sculptures made from found objects, he also talked quite a bit about his process.  He stated that he didn’t want “to be responsible for the decisions he made about what he would do with the “surreal” objects he find in thrift stores.…” I want them to come from the gut, intuitive and fresh”.  For example a sound suit made from beanie babies!  He told us that he had given each of his 5 brothers a sound suit for Christmas ..“and they were shocked”!     but he doesn’t keep them for himself.

He’s most involved with the idea of using the suits to facilitate and build community with a performance.  He’s had several shows with professional dancers wearing the suits and creating the sound effects of the twigs creaking, or the buttons slapping against one another, or the hair (he’s working with human hair now) swishing through the air.

The sound suits have many layers of meaning: they’re about surplus and abundance, but also Medicine Man costumes.  The shape could be “a mitre, a missile and a condom” or a one-man band.  They have no face because “that hides race, gender,class and you see the form without judgment”.

He likes to work with drawing, and collage and stitching ++…the  suits each take about 3 weeks to make with three or four people stitching on it.

He came back several times to the importance on staying loose and free.. 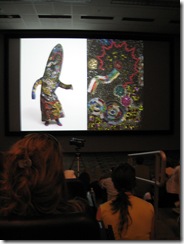 He starts with what he finds at the flea markets, “I go nuts, I don’t know what will inspire me or provoke an idea…”.  He has always done a lot of work and he finds it important to “pay attention to myself and be quiet a lot”.  “You never know what’s going to affect your life and change your thinking”.  Now he wonders: “Do I want to matter in the world?”.    The idea of performance came when he saw a group of kids break dancing in the street and asked them if they would participate in a performance.  “They didn’t know me – but then they put on the suits and danced!”  “And I realised what I was doing had a purpose.”    He plans a 90 sound suit performance…”this is fresh and healthy!”  Even though he could have as many shows as he liked in great galleries, he feels the community work is paramount: “it’s extraordinary to with with a community to build a piece, it can be very intense”.

To the students of art: “Work harder, and keep looking at what’s going on..it’s so competitive out there..produce!..what you don’t know is more stimulating and motivating”.  About his graduate students in Chicago: “they have to deliver!  Crying doesn’t work for me!  They have to come out knowing how to trust themselves”.

He continued: “Forget networking, instead… produce work, don’t get caught up in systems”….and feed the muse with travel, visiting museums, seeing artefacts.    Work.”

and so, to the studio…  this has to be the end of my networking…for today at least!  If you have been, thanks for reading!  Elizabeth

Can't get enough of Nick Cave. Love his advice “Forget networking, instead… produce work, don’t get caught up in systems”
Thanks again!

Wow! Well done! Thank you fro these real words of wisdom from Nick Cave!!! We must know how to trust ourselves, since all we have to offer is our personal visions--sounds trite sometimes but my work does represent ME. So--Know thyself, feed the muse, look at what's going on and DO THE WORK! Thank you for gathering these insights!