I always love to go and hear a talk from a very well established artist and last night went down to the university art dept to Nick Cave’s talk about his work.  The university has a resident artist program: each month artists come for several days to work with the students (lucky students!) and to give a talk which anyone (including old lady quilters) can attend.   though actually I think I was the oldest by miles as the room was absolutely packed out with students most of whom had considerably decorated body parts … 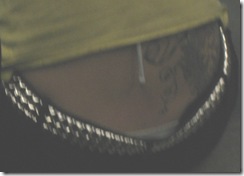 I really felt quite undressed by contrast!

However, it  is really important to see as much art as you can and to have a sense of what is happening in the contemporary art world – what are the major artists working with fiber doing?    Nick Cave is a fabric sculptor and performance artist.   He makes amazing costumes, called Soundsuits , there are lots of images on the internet. 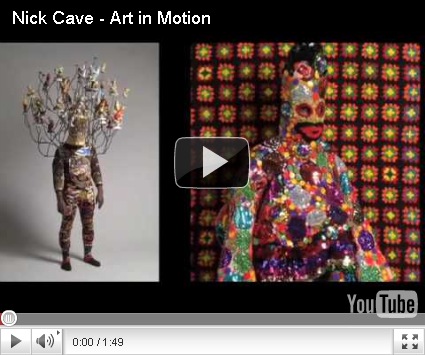 He  was born  in Missouri in 1959,  to a single mother, and has many siblings.  The family had little money and thus began his interest in making art from found objects.   He did his undergraduate work (and learned to sew!)  at the Kansas City Art Institute  graduating in 1982.  He also studied dance with  Alvin Ailey.  He then went to Cranbrook Academy of Art in Michigan in 1989 for his post graduate studies.  He is now the director of the graduate fashion program at School of the Art Institute of Chicago.

Cave stated that he is “committed to the practice of art making, to education and especially to using art as a vehicle for change”.  He’s always worked with found objects and visits flea markets and thrift stores constantly – describing the manic glee and elation at a great find!!  And what amazing stuff he does find!!  I’ve never seen things like this in Georgia, but maybe NYC and Chicago flea markets have better pickings!

He’s worked on a series of sculptures addressing stereotypes..taking objects like the lawn jockey and changing its meaning… 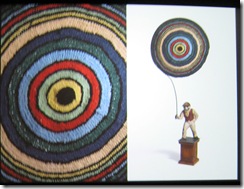 (apologies for the qualities of the photos..taken in a dark auditorium with a little point and shoot, across the heads of many students).

The lawn jockeys were raising amazing beautiful things above their heads, instead of having objects trailing down from their hands.  Cave saw the replacement of meaning – from below to above – as a reconciliation. 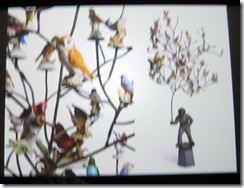 Here the jockey supports a whole tree of birds….. 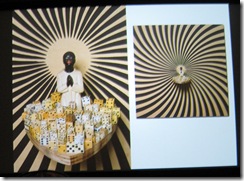 He found this Op Art painting at a flea market, and arranged it with the statue of the praying person, and a whole shelf of dice collected from thrift stores.  Entitled
“I wouldn’t bet against it”, the piece emphasizes the role of choice in life.

He talked about the wonder of “bringing together existing found materials..I never knew what would come together…I was open to waiting”.  He saw this as “renegotiating your relationship with these images”.

In one flea market he was “mesmerized by a kitty cat pillow”: 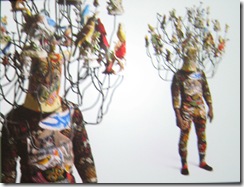 it became the head piece for a sound suit.  the rest of the costume is made from sweaters cut and resewn into a body suit.  The more ornate,kitschy and colorful the better!   Then an armature was added over the shoulders and onto this were wired birds and flowers.
He talked about the “opulence of extreme embellishment” as in tattooing – of which (as I’ve mentioned!) there were many examples in the audience.  The guy sitting next to me had an amazing bunch of flowers tattooed high on his thigh – I got a brief glimpse but daren’t ask him to reveal more so I could get a photo!!  I don’t think I’m going to get tattooed but some of the leggings made from old sweaters were mighty fine!  Fiberart at its best! Would this get into Quilt National?!

More later…if you have been, thanks for reading!  Elizabeth

Posted by Elizabeth Barton at 10:47 AM

OMG E - you are tooo funny. Thanks for sharing this artist - really cool stuff. Just a comment on this generation's fascination with body art - if art is ever changing than how are they going to feel about their permanent tatoos in 10 years??

Nick Cave is one of my absolute favorite artists. Cave's sound suits were in Pittsburgh at the The Society of Contemporary Crafts in 2008. They allowed me to take some photos which I posted on my blog. http://piecingthoughtstogether.blogspot.com/search?q=Nick+Cave
How right you are about checking out what's happening in the contemporary art world. An opportunity to hear Nick Cave speak? WOW I would love to hear him lucky you Elizabeth. Thanks so much for posting.

Thanks for sharing the amazing Nick Cave. What a marvelous sense of humor and original thinking.

Your work is inspiring. I'll be wanting to visit here again.