Which path is the right one?

I always enjoy reading Robert Genn’s newsletter Painters’ Keys because often he makes an observation that sets off my cogitations. Today, quoting Robert Frost whom as we all know took the path less travelled, Genn talks about the possibility of taking the wrong path with one’s art. If we can look back over our art quilt career and think of it as a journey, can we see any wrong turnings? I can certainly see places where I lingered too long and should have pushed myself onward and upward a lot more quickly than I did. 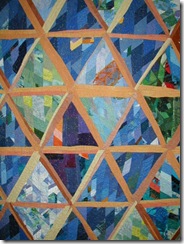 Almost 10 years making traditional quilts for which I had little talent (not having fine motor skills, nor being a person who can tolerate finicky details) was perhaps not a wrong turn, being a starting point…but a place I should have left much more quickly!! Even though it is difficult to leave the fellowship of the traditional guild and the certainty of following a tried and true pattern, I should have leapt out! 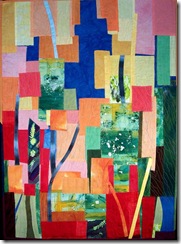 After that, like so many, I became influenced by a particularly brilliant star in the Art Quilt world and felt I had to follow her rules too. But it wasn’t long before I realized that this time I did need to follow my own path. 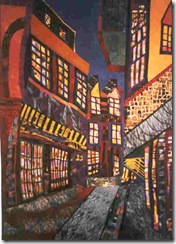 I wanted my quilts to have some meaning and also to relate to my own history. I’m sure all immigrants feel the need to maintain some aspect of the old home country even if there are many advantages to the new one. I suspect that immigrants who engage in any art form will find it is significantly influenced by their original country. There’s a need to preserve a little piece of the culture – whether visual, or musical, taste or movement related. 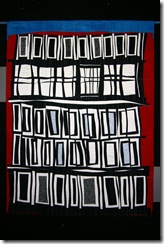 Since then I would say I’ve explored a few different allees in the Art Quilt garden and definitely one or two mazes that were difficult to escape from! Frost was lucky he only had two paths from which to choose!

But how d’you know which is the right road for you?

And how d’you know when you’re on the wrong one ?

The answer to the latter question seems more straightforward – you’re on the wrong path if you’re not reaching your goals. Doesn’t matter what your goals are, as long as you know where you want to go. D’you want to be a Houston star? D’you want to be well known in the Quilting Arts world (oh, by the way, I do have a little piece and few pictures in this month’s Quilting Arts magazine – which is great! Nice to get published). D’you want an academic career? Or be a workshop person flying around the world? Or get into museums? Or sell a lot? Or bring social and political issues to our awareness? Tell your own personal story? Make real – i.e. lasting – art? Make beauty.

For me, I feel I’m on the wrong path when I notice I’m going round in circles (like those mazes) where I seem to be making more and more of the same type and quality of work. I am also a person who likes a beautiful view – about more than anything I think. I’d swap a view for a meal or a concert or a party anytime! Getting to know what is important to you should help you to find the right road. I know which of the above goals I can discard, and which are more important..I think it’s time to pack up my bags, pick up my step and start exploring! Onward and upward!

Do comment on your own directional decisions ..we may meet on a path one day! If you have been, thanks for reading! Elizabeth

Posted by Elizabeth Barton at 4:26 PM

Another fascinating blog to contemplate. I think I'm doing pretty well right now because I'm excited about every piece I make, and though my husband has favorites of my work he brags about, pretty much my favorite is the current one. I'm trying to watch for trends and see some but I've still not settled in and am not sure I want to. I think I am developing a style though it is difficult to articulate. I can see the same hand in my work--fun to look back as well as forward, isn't it? Rewarding and informative. Thank you for sharing so much of your development. AND--great job in Quilting Arts!!!

I am curious - where are you an immigrant from?
All the black and white houses/ quilts remind me very much of Chesyer in the UK - is there a connection there?

Thank you for your post! You always seem to comment on what is also going on in my life, what I am wondering about. Like what if so called experts seem to not like what you are doing? Do you start over, or keep on with your obsession, but work to make it better...thanks again!

I, too, stayed too long in the traditional format (rug hooking being my art). While I miss the wonderful people I met, it was the best thing I ever did for my growth as an artist. Stay true to what comes from within--i.e. follow your own path. I'm currently creating abstract striped pieces based on my photos of local scenes (railroads, fences, sheds, etc) for a show next year and could not be happier. Love your blog and would certainly enjoy meeting you on a pathway.

I too love views -- your city ones catch me every time, although the ones I've done most recently are desert views. I think, sometimes, awareness of one's own peculiar tendencies -- toward comfort, toward adventure, toward waywardness, toward convenience -- is really helpful. When I feel myself sinking into comfortableness with my art, a little bell rings and something tells me that I might need to break a pattern in some way. Or maybe, as my husband tells me, if I can do something easily, I tend to think it's not worthwhile. I'm not sure, but I am sure that ambiguity and ambivalence are burdens that artists carry with them. Some talk big and loud to try to drown out the lack of surety, but it only, for me, makes it more obvious.

Finding your own way is one of the most difficult aspects of any art form. I think we all know when we aren't on the right path but it's finding the right one that is difficult. When you're on it, however, you know it right away as you sail down the path.