Well I’m off  tomorrow to teach a workshop on Working in a Series at Quilting by the Lake.  There is no lake, alas – but the new college where the workshop is to be held is on a hill, so there should be good views and lots of fresh air!!  Two things I really love.  Plus excellent facilities including a/v back up which is really great.  Having taught quiltmaking at the continuing Education Centre at the University of Georgia for many years I was  spoilt by having any audio or visual device I wanted available at any time…so workshops in windowless hotel conference rooms where there is nothing available except tables of the wrong height is extremely frustrating.  I’m also thrilled to be asked to teach at Penland next year – an arts and crafts school near Asheville, NC with a wonderful reputation. (and great a/v!)

I’ve always worked in a series myself.  I found I had such a tendency to try to put all my ideas about something into one piece with such a chaotic result, unbalanced, unfocussed, full of knight’s move right brain thinking that you needed anti-nausea pills to even look at it!   Splitting up the ideas across several quilts really helped.  Plus it meant I didn’t have to reinvent solutions to problems all the time.  If I came across a neat way to solve something I could use it more than once – obviously, though,  not ad nauseam (again!).

Though working in a series is not a new practice for me, therefore, this actual workshop is.  It’s going to be really exciting working with people who are prepared to push themselves beyond making one piece in the style of the current instructor.  There is an awful temptation to do that when you take a workshop and it’s quite natural.  I see it as a normal developmental step.  But then, as Picasso said, you have to reach the stage where instead of borrowing another artist’s ideas and just using them for a short while before borrowing someone else’s,  you steal them!  You take them away and make them completely your own! Expand them, develop them, improve them.  You know if you borrow a sweater from someone, they’re not going to be thrilled if you change it – but if you sneak if out of their wardrobe when they’re not looking……you can cut it in two, insert another colour, throw it in a dye bath, shorten the sleeves, cut down the high neck…etc etc and then it’s your creation!!!  So my workshop will definitely be about “stealing”! (and please don’t worry if you’re just coming for fun!! that’s a perfectly legitimate and worthy goal!!)

Actually T. S. Eliot, a poet I’ve always loved, said something very similar:
“One of the surest tests [of the superiority or inferiority of a poet] is the way in which a poet borrows. Immature poets imitate; mature poets steal; bad poets deface what they take, and good poets make it into something better, or at least something different. The good poet welds his theft into a whole of feeling which is unique, utterly different than that from which it is torn; the bad poet throws it into something which has no cohesion.
( Eliot, T.S., “Philip Massinger,” The Sacred Wood, New York: Bartleby.com, 2000.)

As an interesting corollary, Eliot went on to say:
A good poet will usually borrow from authors remote in time, or alien in language, or diverse in interest.
Those of you who watched the recent Bravo Fashion design show will have seen clear examples of when to “steal” (from different cultures and times) and when not (copying a runway dress from a current wellknown designer).  These are some of the ideas we’ll be discussing in class. 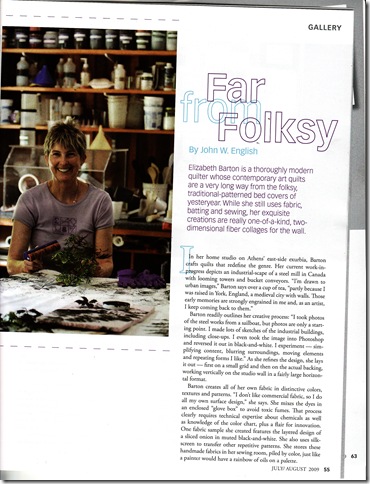 What the class won’t be is folksy!  Why does the popular press still begin virtually every piece on art quilts with some reference to your grandma or days gone by?  Here is the first page on an article published this last week in Athens magazine, a nice glossy magazine with some beautiful pictures  including about half a dozen of my quilts to say nothing of my somewhat less glossy phyzog!  It’s great to be in print though! and the rest of the article is just fine – I only wish I lived up to it!!!

I’ll be posting again after QBL – and with luck with have some pictures!

so, if you have been, thanks for reading!!
Elizabeth

Posted by Elizabeth Barton at 7:57 AM

I cant wait to look at the magazine and see your work!!! Have fun in New York!! By the way, I have started my first series based on stairs that I photographed in Portugal. Thanks for the encouragement from your blog!!!!