Inspiration: everything is grist

Do all who create – whether it be in threads, pigment, words or quavers – walk around constantly sensing possible ideas? Now, when I look at green, I think hmm could be viridian with a touch of burnt sienna….or maybe a mix of Sun yellow with Cotton black! Looking out of the train window on my trip to the UK I saw a great quilt! I’ve already made one about the cooling towers at Ferrybridge..................... 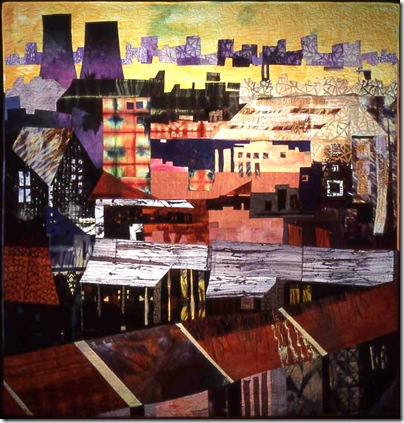 (Actually, it’s going to be in the SAQA show (or maybe one of the SAQA shows!) at the Festival of Patchwork in Birmingham this August. I won’t be there, by the way…but maybe…. next year!) 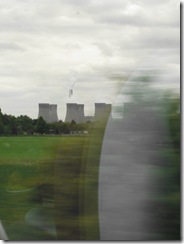 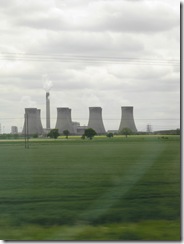 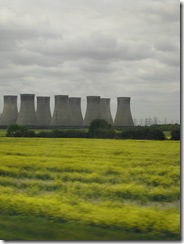 My first glimpse…including the back of the seat! don’t think I’ll include that! but that line of trees is quite nice, in the second picture, the towers line up too much but there are some interesting other verticals, and in the third picture I saw the wonderful contrast between the field of rape, the trees, the towers and the clouds!

I also saw some wonderful chimneys and rooftops!! Lots of inspirations….here’s just one from Kendal – the two people looked a little surprised thinking I was taking their photo! 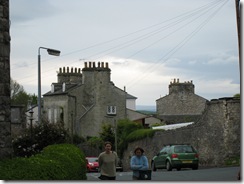 There’s some definite possibilities…..but I also like the stone cottage below with the sky and the road to the loch!! (This is Iona, about 10.30 pm!) 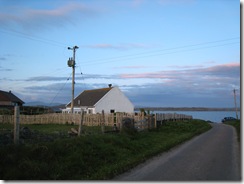 Seeing other people’s artwork is also inspiring. I visited the National Patchwork museum in York and saw their current show: Pearls, Pearls, Pearls. Each quilt had a pearly theme which made for lots of circles and beautiful pearly colours! Most interestingly, at least 3 people had sought further inspiration from poetry. Given the pearl theme, they had researched how poets had dealt with the image. A good way of approaching a task through a different sense – so that way you wouldn’t get overly influenced by how someone else had dealt with the theme. My favorite piece though was Kaffe Fassett’s pearl button vest: 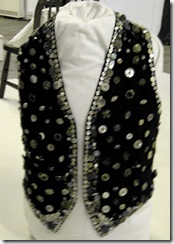 I could certainly see myself wearing that!! The only thing was, he had only put buttons on the front and I think you’d need some on the back too so that the front didn’t pull down with the weight.

Can you still buy pearl buttons by the jam jar full? You used to be able to just dip your jar into a big box for a dollar or so…or am I just showing my age!

Posted by Elizabeth Barton at 6:58 AM

Such inspiration! Love the vest but I do not think you will find pearl buttons for a $1 a jar anymore.
:)

Being a visual junkie, I'm constantly being hit by inspirational material around me. That said, I have to go out of my way to limit how it effects my work. It can easily pull me into another direction and then another and then another, till nothing gets done! Also, it frustrates me that the people closest to me can't see the potential in a picture or scene that strikes me so strong.

I am glad you are back. I have missed reading your posts. However, how nice to be able to travel with you vicariously. What beautiful and inspiring scenery. I would love to go into that remote kind of country. It is where my heart truly sings.

I love Kaffe's vest too, but I agree the back should have been covered as well as the front to give the piece balance.