Getting back into studio routine

Getting back into studio routine is so tough after a long trip! I just got home after 4 weeks in the UK including two weeks in Western Scotland in the most beautiful scenery. 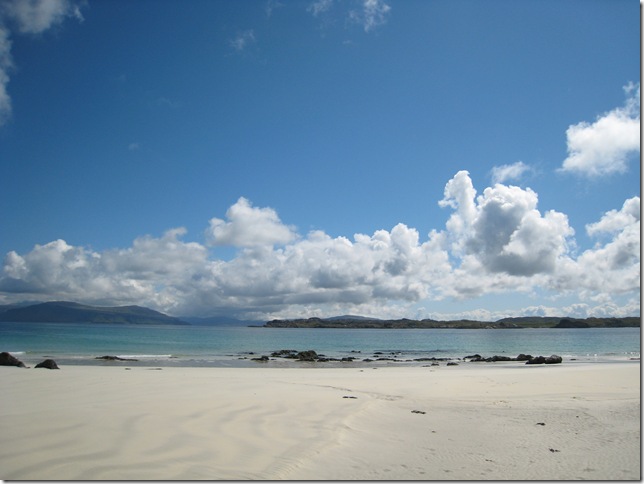 This is the beach on the north western tip of Iona – it really was that beautiful, that sunny and that empty!!!
Iona is a tiny island off Mull (a much bigger island) in Scotland.  Many of these islands have been settled for centuries.  On Iona a monastic community was first developed in 563 AD  by St. Columba.  From this beginning Celtic Christianity spread to Scotland and on to Europe.  His original wooden buildings were replaced by a stone abbey begun around 1200 AD – this has now been fully restored.  The island takes some getting to!!  About 12 hours and 7 different forms of transport…..but so inspiring, so endlessly fascinating.

The island has glorious walks in every direction, open spaces of daisy covered fields and sky – but maybe too beautiful to try to copy, in any medium.  should one even try?  Isn’t it the artist’s task to show beauty where we might not have seen?…  rather than make a pallid attempt at describing such awesome natural beauty?  Perhaps it would be a more valid task to attempt to show a more personal or limited aspect, not the overall grandeur of the landscape.  I found as I sat on the beach attempting one watercolour after another that I needed to simplify more and more each time – have you seen Georgia O’keefe’s watercolours – where she describes the entire arc of the sky in one tremendous whoosh of colour?  Oh, to reach the whoosh!!! 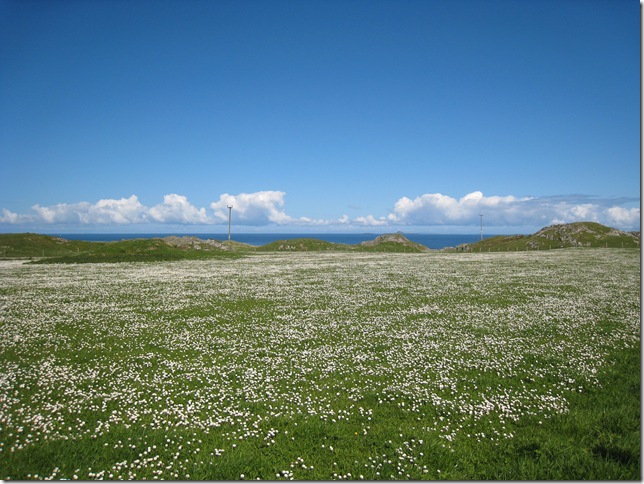 One day I took a boat trip to Staffa and clambered along the path (holding grimly onto the rail!) into Fingal’s Cave: that’s me on the right with my five layers of clothing! 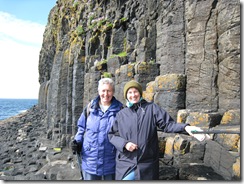 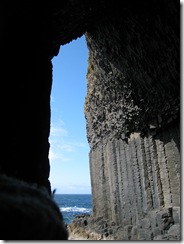 After Iona, I stayed a week on Knoydart – a very remote peninsula with no roads – we came in on a RIB (rigid inflatable boat) eating fish and chips (of course!): 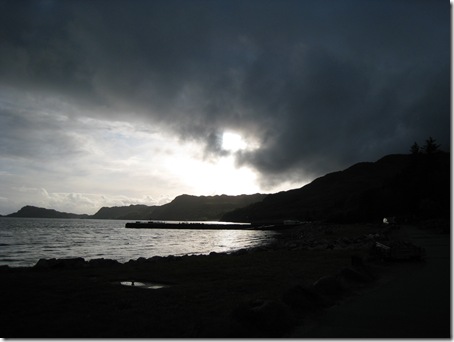 - this is the jetty – and look at those wonderful rain clouds!!!

Talking to the postman (mailman) one day I was thrilled to learn that Ian McEwan (a favorite author of mine) was going to give a rare reading of his work at the village hall later in the week.  What a treat! and how unexpected!!  The  tiny hall was packed with 50 or so locals and summer visitors. Ian read from the book he is working on right now – beautifully – a wonderful reader.  The book is about global warming and he has done an amazing amount of research, spending a year or more on a ship in polar ice (I’m sorry I’ve forgotten which pole!).   He answered loads of questions  about his research,  writing experiences, filming experiences, many anecdotes etc.  Despite admitting to being “very dark”, he can be really funny.  He stated that he was definitely getting warmer as he got older – but maybe that’s because of the climate!     It was interesting that his creative process in writing a book is not dissimilar to that of creating a visual piece in that he would determine a main theme, secondary points of interest, ways into the story, balance, scale and harmony and contrast – all the important things for visual composition.

And now…to get back into the Discipline of Studio Routine – but with such inspiration and expanded vision…
If you have been, thanks for reading!!  I’ll put up more pictures, and talk about the trip to the Patchwork Museum in York in a day or two.

Posted by Elizabeth Barton at 2:30 PM

Welcome home! I so envy your trip!

Western Scotland. We did a hiking trip there a few years ago, in May. the Isle of Mull and Iona were favorite places. I developed a love of Oban single malt while there.

based on this one post, I may not have come back. you've been missed.

Wonderful scenery, thanks for posting.

I understand your frustration and quest to capture beauty on a larger scale. Not surprisingly, I think you're right on track with the concept of simplification. Zeroing in on details is one option, but sometimes I'd like to capture the macro-view! Your questioning comes in there, doesn't it--what is it about this scene that catches my fancy? Scotland often has such simple lines but the depth is more difficult to render. Great photos.

Glad you had a good time on your trip. Lovely that you had the luck to run into Ian McEwan in Knoydart of all places - not exactly Oxford Circus! He was in the Arctic with a Cape Farewell expedition: http://www.capefarewell.com/art/artists/ian-mcewan.html

I must say I'm very much looking forward to his new novel.