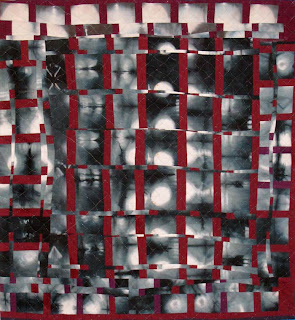 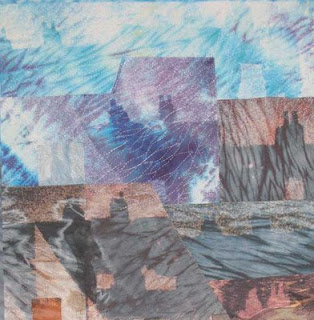 I've put a couple of new pieces up on the blogstore - and rearranged the others a little; I'm still thinking about keeping one of the In the Garden pieces for myself though!

However, today my topic is "initial inertia" - what I'm referring to is the problem of starting. I used to have a tank of a car which took about a gallon of gas just to get moving but once that thing was rolling it would keep on going for a long time!! Working in the studio is often like that...just getting started on something can be very difficult, but once you're into it it's not so hard to keep going. As I said the other day, some artists, particularly writers, will leave a little "start" for the morrow as they finish each night. Maybe one sentence in the typewriter" "on a dark and stormy night on the West coast of Scotland"...is a tried and true first sentence!!

Twyla Tharp (The Creative Habit, a book I really recommend) writes "creative people have preparation rituals linked to the setting in which they choose to start their day...[and by ] putting themselves in this (particular) environment, they begin their creative day". In medieval times, it was believed that if you put yourself in a pious position you would feel pious! So I guess, putting yourself trough a particular series of steps begins the creative dance. Twyla Tharp rises very early at the same time and goes straight to the gym to begin her creative day.
Getting into the environment definitely helps....trying to begin when you are sitting (or worse yet, reclining!!) on the sofa reading a book is much more difficult. Easier to say, by 9am (or whatever) I have to be In The Studio! being in the creative environment will help you to feel in a more creative mood - it's all conditioning!!

A routine definitely helps. According to Michael Kimmelman in his fascinating book The Accidental Masterpiece (full of little inside stories about artists), Chopin would begin his day by playing Bach preludes and fugues. Beethoven took a walk with a notebook in hand. Chuck Close talks about the importance of having a routine: "knowing what to do is crucial because I'm naturally lazy. A routine is what keeps me from going crazy. It's calming".

Having a fixed starting point from which to begin the day makes it much easier to start rolling.
One possibility, therefore, is to leave a deliberate starting point:
"Tomorrow I will begin by pinning all the elements together that are now loosely arranged on the design wall"...or "tomorrow I will begin by fixing the bottom LH corner which isn't heavy enough - I have 3 possibilities I could try: add darker colours, add a stronger shape, repeat what I've done in the RH corner". If you are "between pieces" and don't know where to go at all:
"tomorrow I will look through my photographs and choose an image that intrigues me and do 6 designs based on it" , or" tomorrow I will go out and take the photographs I've been thinking about".
Another possibility is to have a routine (like the dancer at the barre) with which you begin each day - it could be sorting out fabric, looking at books, looking over older pieces....I would suggest that it is time limited!!! I will do my creative routines and then I'll begin!

Have you any ideas for overcoming initial inertia?
if so, please leave a comment!!
And, if you have been, thanks for reading!
Elizabeth
Posted by Elizabeth Barton at 6:18 AM

A good way to stop me getting this inertia would be to go easy on Blog reading because it uses up such a lot of time - but on the other hand it gives inspiration too. I think a good way to really stop inertia is to say "actually I can only spend an hour in the studio today" - that really puts a rocket under you!

I like a tidy environment. I clean up the quilt room the night before (or sometimes morning of) and then everything is ready for me-iron ready to be plugged in, project basket out, list of day's tasks etc. My routine is to try and start at about the same time each day-just like I used to do at my regular job. This actually works most of the time!

PS-I am enjoying the frequent use of alliteration. Something comforting about the repetition...

If I give myself the opportunity to think about what I want to do over a period of time, then I am ready to go to work when I enter my studio. Yes, I need the studio to be in some semblance of order, so I spend time periodically tidying or organizing. But when I go in, I have an idea of what I will be doing there.
One side note: I do spend time visiting the blogs of others, for inspiration and enjoyment of what they are working on. I have limited contact with other fiber artists where I live, so it's a real joy to see what others do! But I get up really early to accomplish this, so it does not detract from my studio time...

A must read is "The War of Art" by Steven Pressfield. He lables the enemy of creativity "resistance" and really inspired me to do work every day even if if isn't any good. Personally I think it's better than Twyla's book.