Are all loves old loves?

I just recently finished the third of my new industrial landscape pieces. 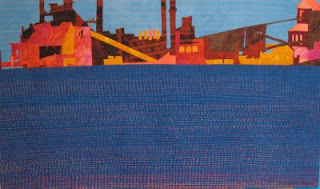 I was inspired by seeing the Hamilton Bay steel works across Lake Ontario (actually the Hamilton Bay) last summer…I had thought this was an whole new venture for me!! However, when I started putting together the web page “Industrial Landscapes”, I realized that I have always been intrigued by such images.

When I was growing up – in the beautiful old Roman city of York, England – a mere 2000 years old – every day I saw old buildings. The medieval ones were the most fascinating with their exoskeletons of timbering with plaster between – and there are many of those in York.
See my Buildings web page for quilts I’ve made about them.


I made a lot of quilts about the old streets in York too; many of the quilts were night scenes – or apparent night scenes I should say!! Actually they were based on memories of being “down town” (where I worked in my parent’s shop) in winter – past 3 o’clock and the sky was dark and all the windows in the old buildings glowing.. 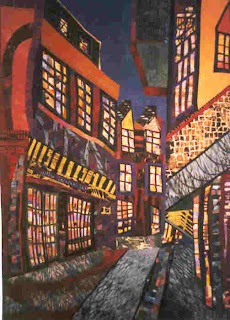 I also walked to school (founded in the 17th century!) along the Roman walls, going past the Minster......


(begun in the 10th century) and the largest cathedral in Europe, and past the Georgian terraces and old Assembly rooms (shades of Jane Austen!). My house was in "The Groves", old Victorian terraces – the area written about by Kate Atkinson in her book Behind the Scenes at the Museum which was so much the York I remembered it was uncanny!

York wasn’t all beautiful though, at the bottom of our street was the river Fosse which went right past the gasworks on its way to the confluence with the main river, the Ouse. I could see the gasworks from the attic window – the old gasometer going up and down – I have no idea why!!! Presumably when it was up it was full of gas! All is explained here
and there’s actually a picture of part of the Gasworks on flicker –I nearly fell over backwards!!

My first job was in a huge chocolate factory in the city, a lovely Victorian building with lots of windows, but also strange pipes, chimneys and gantries. And so, it can be seen that my interest in industrial buildings also dates back a long way. 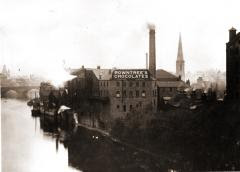 Take a long hard look at the quilts you’ve made and see if you can spot those old loves and fascinations!
And, if you have been, thanks for reading!
Elizabeth
Posted by Elizabeth Barton at 9:07 AM

I just started following your blog, Elizabeth. I love your work. Honestly, when I just saw the Hamilton Bay Steel Works quilt, I thought it was a photo. No kidding!
Incidentally, my boyfriend grew up in Hamilton!
Looking forward to following your work.

Elizabeth, I read your blog regularly and was so surprised to find the Hamilton steelworks here today. I grew up there, you got the image from the bridge perfectly right!
But even more so your essay on staying focused is beautifully put and succinct. I'm going back to my blog to tell people to come over here and read this. Thank you!