. Space? Not outer space! Space in your quilt designs. It's fascinating how using deep space versus shallow space can vastly alter the image. Many 20th century painters explored varying space...David Hockney in particular enjoyed flattening and deepening and even reversing! Traditional paintings (prior to the late 19th Century) usually portrayed a sense of depth or 3-dimensionality – foreground, middle ground and background. Once cameras were invented, painters began to explore ideas other than the reproduction (however beautiful) of a specific person or scene. Many painters chose to flatten the space in the picture as they wanted to emphasize the idea that a painting was just that: a painting. It does seem ironic that after the struggles of painters in the Middle Ages and Renaissance to develop depth in their work, just a few centuries later artists would be eschewing such pictorial ideas!! In fact, some of them even pushing in the other direction with reverse perspective such as David Hockney has played with. Most traditional quilt patterns don’t involve ideas of depth: their abstract designs were well ahead of abstraction in the fine art world! (Which, of course, the Whitney eventually realized with their show of the Gees Bend Quilts a few years ago!). So for art quilt designers today there is a choice – shallow space or deep? Do we want to convey the illusion of deep space or not? If we do, there are a number of devices by which this can be done. People ask me about perspective; I personally rarely use it to indicate space – but I do, however, think it’s important not to get perspective wrong unintentionally. Quilts that have a lot of perspective drawing are of a much more controlled style than I am interested in. If you look at books on linear perspective drawing, all the illustrations look like blueprints rather than art. However I do think it’s worthwhile to read a couple of articles or books on the subject and work a few examples, so you have a sense of the different kinds of perspective (one point, two point etc), how it’s indicated in a reproduction, where the horizon or eyeline is and what effect that might have upon various 3D objects in your design. Apart from actually using perspective there are a number of tools you can use to indicate depth - and these are the ones that most artists do use. Overlapping: if we see a picture of an apple in front of a box…we “know” the apple is in front, we don’t think that the apple is behind the box which has an apple-shaped hole cut in it! The same for a man in front of a wall. or a tree in front of a lake. Overlapping is one of the major ways by which we judge depth. Think about it when you’re driving around town! 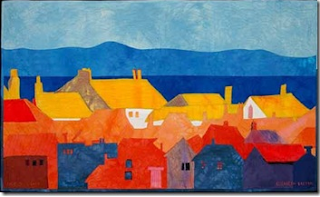 Edge of Light In this quilt, “Edge of Light”, I’ve used overlapping to indicate the rows of cottages being in front of the water and the distant hills. I haven’t really used any other devices as my interest was in the way the far group of cottages caught the light, rather than distance or other concerns. Size: if we see a tree in the distance, it actually looks much smaller than a man right in front of us standing on our feet!! we don’t think we have a giant right next to us and a bonsai in the distance…our brains automatically compute – smaller therefore further away. 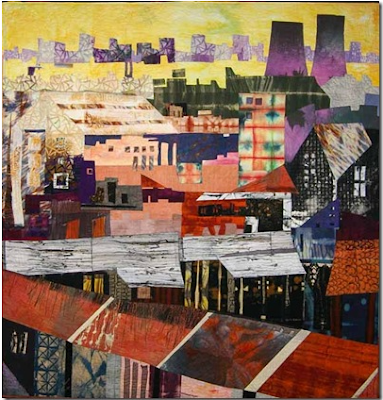 Ferry Bridge In the quilt on the right, Ferrybridge, I don’t mean to indicate that the terrace houses at the bottom of the quilt are larger than the cooling towers at the top, rather that they are a lot nearer – so they are bigger. This quilt also uses placement on the picture plane to indicate depth – the lower an item is on the quilt, the nearer it is to us, the higher it is, the more we read it as being further away. That's obvious, because if something is small and far away it's not going to be visible behind everything anyway. Our brains soon get used to figuring these things out. Interestingly, it is the brain's experience that does figure it out - it's not built in. If your brain was deprived of distant views from infancy, it would be much harder for you to see and understand this kind of depth. Colour can be described in 4 different ways: hue, value, intensity and temperature. Each of these can be used to indicate distance or closeness. Things that are further away tend to be bluer (as we are looking at them through all the moisture and dust in the atmosphere), the colours are less intense, the values are lighter, and the temperature is cooler (towards blue, closer things being toward red). You can see some of these colour changes in the quilt below (Overlook): 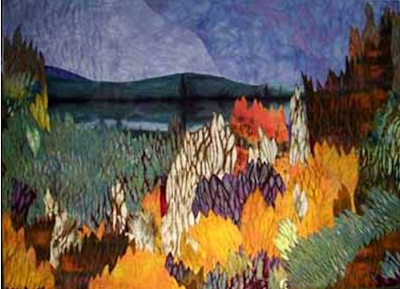 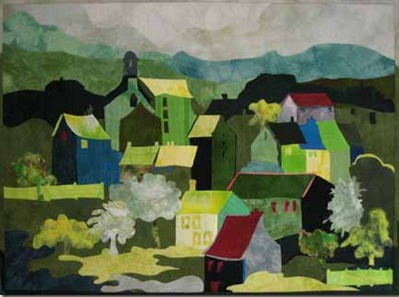 In Greenhouses, the trees in the front are more detailed. The foreground of houses and trees is much more detailed and with a lot more contrast, than the middle ground of darker more amorphous shapes, and the distance of soft hills has very little contrast or detail. Of course in real life and in designing life, you wouldn’t just choose or use one device alone to assess distance, usually there are combinations. And, as you can see from above, you don’t always have to follow all the rules!! If you want to experiment with designing with space – consider foreground, middle ground and background: 3 distinct levels of space. Starting with the furthest point in the landscape and building forwards..developing more contrast etc. And, if you have been, thanks for reading! Now for some space! Elizabeth
Posted by Elizabeth Barton at 6:16 AM

Great post. I am no longer from "middle age" but am certainly a Renaissance woman for I love these quilts more than those that look like a poster, even though many of mine are without perspective. or maybe its just a love for the outdoors! Thank you for giving me a happy place this day of hard work and a greater sense of isolation than usual My hubby was curling this morning and golfing this afternoon.(No kidding) At least he will be home for supper! And I have a very flat background on my design wall and another very flat "who let the dogs out" quilt on the longarm. Still wanting to do landscapes and houses...

The "Edge of Light" piece is amazing - your color palette is exquisite!

Hi Elsie!! good to hear from you...I am very sure you are a Renaissance woman! Discovering new things all the time.
Life can get boring these days, the news always seems to be the same: bad!
But the two ladies winning the Nobel prize for chemistry!! that's great! and their discoveries should eventually help very many people.
you must do your landscapes and houses!! start soon!!! all the best Elizabeth

Hi Tierney - thank you for commenting! Especially such a nice compliment...
That was a pretty quilt, it's now in Reno, Nevada owned by a very dear kind person who helped me a lot when I needed it. I hope it brings some light to her too.
Thank you for reading!! the comments always inspire me. Elizabeth