I was just reading a book by Kenneth Clark, a noted British art historian, critic, writer, presenter and author of the television program "Civilisation" , perhaps not so well known in the USA but certainly a household name in the UK when I was growing up there.

Clark had as his main goal that he should to promote art/artists and that he would make both the art and the artists  comprehensible to everyone.
He believed that the purpose of art is to express ideas and feelings, to communicate them in a way that is perhaps more understandable, certainly more memorable, than a complicated verbal message especially one that might be overly complex, obfuscated by verbiage.

I'm currently running a class "Abstract Art for Quiltmakers" at the academyofquilting.com and a couple of folk have suggested that only completely non objective art (no reference to anything real at all in any way) is truly abstract art.   I begged to differ for I feel that we can define the term abstract very widely - basically, I would say, to encompass most art where the maker's intent was not to make a realistic copy of something in real life.

Kenneth Clark approached the idea of abstract art from a different angle. He wrote: "Abstract art, in anything like a pure form, has the fatal defect of purity. without a pinch of earth, the artist soon contracts  spiritual beri-beri and dies of exhaustion".   His "pinch of earth" was the connection with reality, the subjective - the hint of a landscape, the evidence of the artist's  handwork, the shape that almost reminds you of something.

Sadly in World War I many wonderful artists, poets and writers were killed.  In WWII, Clark used his influence to keep artists out of the battlefields and instead had them work to record the visual events for history.  Here from the Imperial War Museum  is an example, Paul Nash's Battle of Britain: 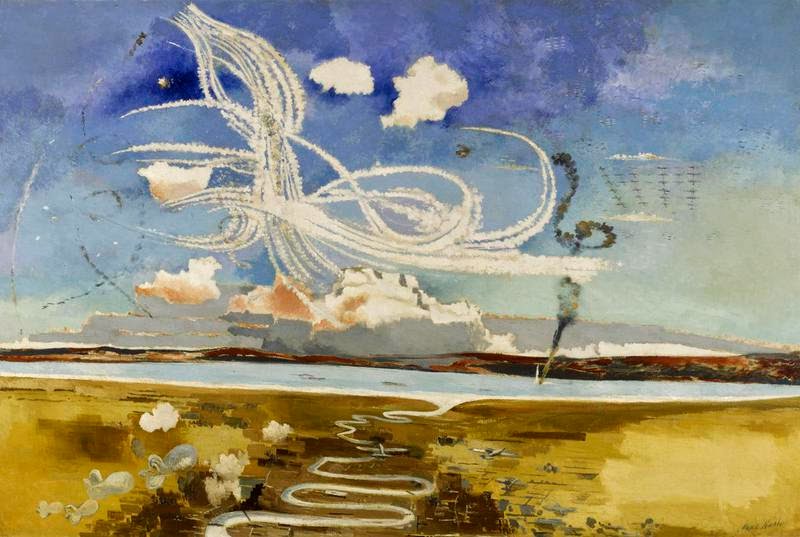 In this era when art education has been demoted to elective status in many school because it's not "on the test", we need art champions such as Kenneth Clark.

it's funny how you start reading about one thing - abstraction - and then end up thinking about something apparently different - education...but perhaps not.  Perhaps art is not such much abstract as both  a reality and a necessity.  In many ways, society is trying to get rid of those pinches of earth, evidences of nature and humanity...but they are necessary lest we die of vitamin deficiency.

And, if you have been, thanks for reading!!  Elizabeth
Posted by Elizabeth Barton at 12:29 PM

We do know Kenneth Clark on this side of the pond and I watched his program faithfully each Sunday night in my younger days, but I don't remember his comments on contemporary art. I will have to hunt for his book that I have somewhere. I like that pinch of earth element to abstract art and my own work is perhaps often more abstracted than purely abstract, but I am not sure I would want to condemn the likes of Rothko or Clyfford Still to spiritual beri-beri.

Well-done as usual with many ideas to mull over. thank you for the painting (I can't go back to get the artist or title), it is at once lyrical and horrifying. Masterful.
I am busily reading about Donna Leon's Comissario Brunetti right now. Thank you for injecting more substance into my reading list for when I finish Leon's lighter works!