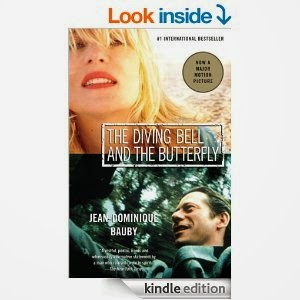 I watched an amazing French film the other night.  Called La Scaphandre et Le Papillon - The Diving Bell and the Butterfly.
It's based on the book by Jean-Dominique Bauby who was the editor of Elle magazine in France.  Bauby suffered a massive stroke which paralyzed every part of him except one eyelid.  A speech therapist discovered a way for him to communicate using just that one eyelid and he wrote a short book about his experience.  Film director and artist Julian Schnabel made the film of the book

The film is fascinating and beautiful, very visually beautiful and what really interested me was its design.  AFTER I've seen a film or read a book, I like to read the reviews to see how others' experience of it compared with mine.  One of the comments I read was "Why did Schnabel show three children in the movie, when Bauby actually only had two".  I started thinking about that and I realised that there were a number of scenes with the children playing on the  beach - they would not have been half so visually effective had there been only two children.  Schnabel as a painter made an artistic decision to change what was actually there in order to enhance his visual creation. 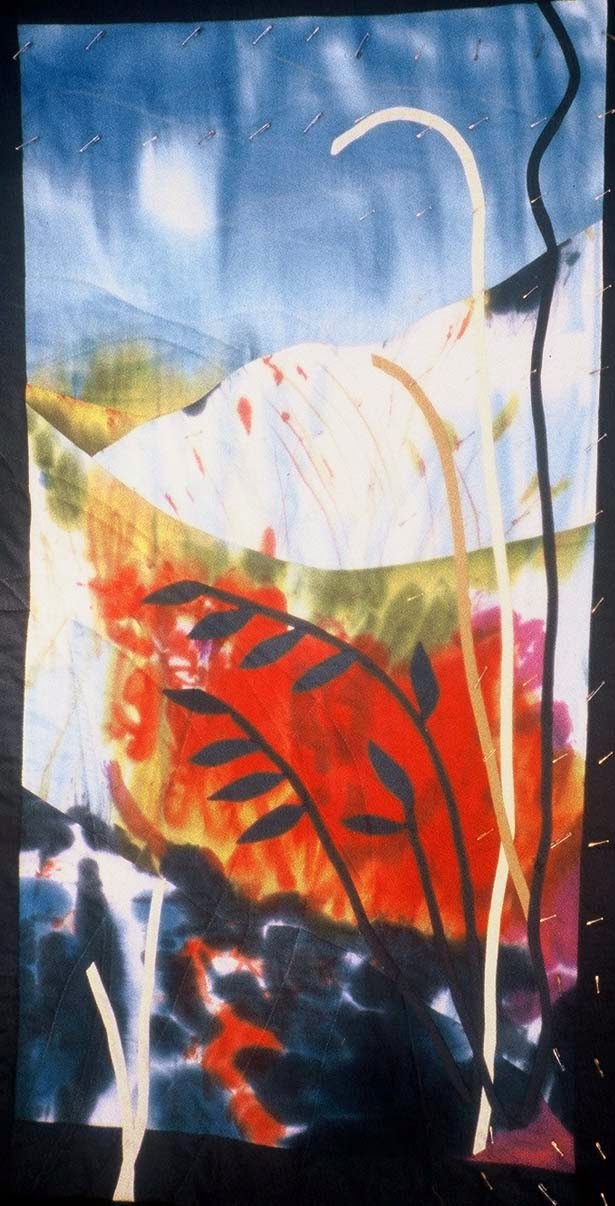 Time after time, I've walked around a workshop where people are making quilts based on photographs and I've asked "why do you have only two trees?  One on each side, like soldiers?"  And the response, of course, is "because there are only two trees in the photograph"!  Or that, in the photograph, the sky is blue, the sand is yellow, the grass is green, the house is grey so all of these must be literally copied!!  As artists we are not creating a documentary or an historically correct archive of How It Was, we are making something beautiful - and we must consider what changes to any of the variables with which we work will enhance that beauty.

Bauby too - with the help of an extraordinarily dedicated therapist - made something beautiful from something which was not.

It was another Frenchman who wrote: we are what we think! Or was it the other way round!  Aha - but remember you can CHANGE things!!
If you have been, thanks for reading!  Elizabeth
Posted by Elizabeth Barton at 7:12 AM

Interesting blog and something that I have been thinking about lately. Between your master class and a class I had with Ellen Lindner a few years ago I am finally breaking away from creating something exactly as it was in the photograph.

I think trying to duplicate a photo exactly was the reason it took me so long (6 years) to finish my Isle of Skye quilt. I could just never find the right fabrics to match the rocks in the foreground of the photo. Eventually I just forced myself to create rocks that were not exactly like the photo. The cliffs had waterfalls, that I eventually left out because I began to think who was even going to see that on my quilt. On the other hand it only took about a month to create my tree and cardinal quilt because I did not try to duplicate the photo. So we can certainly can improve on nature!

In your master class I have made things colors I would not have even thought of using just a few years ago. Green buildings, blue and green church arches. My husband doesn't know how to take that yet. I think he still thinks that you should stick to the photo.

On the other hand when I made the quilt of my parent's house I had to stick with the photo. I can remember consulting with my dad about a white flowering tree in the front yard. I had great pink or blue fabric I could have used, but I can recall him pointing out that the tree was white. So white it ended up. I don't think my parents were ready for a quilt of their house that was EB style!

While I still have a lot to learn I feel I have improved a lot in this area since the master class started in January.

Thanks for the film recommendation and the cogitations upon visual beauty. I need to quit cogitating and start designing! So hard to commit to an idea.

Learning that my piece doesn't need to match the inspiration photo was a slow lesson for me to learn, but I have done it.What freedom results from that decision! I think you are the first to mention it--Thank you!!!

Learning that my piece doesn't need to match the inspiration photo was a slow lesson for me to learn, but I have done it.What freedom results from that decision! I think you are the first to mention it--Thank you!!!

I recently watched that DVD and really enjoyed it. His spirit and the therapists dedication was so moving. You might like " The Intouchables" too.

Chris: what your Dad wanted was his memories of his house and tree memorialized in an artwork created by his daughter - and that you gave him!! Maybe- as art - the piece would be stronger with different colors - but you were not making it as stand alone art. it's always important to know why we are making what we do!
And yes - I've seen Intouchables and it's another great movie - also based on a true story and very funny!! Much happier ending of course. another French movie I'd recommend is My Wife is an Actress. Really funny! As one might guess I'm trying to pick up some French because I'm headed to Paris in less than a month!

I've seen the film and it's really interesting. Like what you wrote about copying a photo into a quilt. I know this is a problem of mine and I'm really trying to avoid it.

Interesting to read this in a season wherein I've finally begun to take more 'artistic license' with my work (based on photos) -- moving trees, changing the number or the layout, adding items not originally in the photo, etc.) to create greater interest. I've finally learned that it doesn't matter...I'm interpreting a scene, not trying to replicate it. It's very freeing!

Hi Elizabeth, just wanted to say thank you for the movie recommendation. I really enjoyed watching it. I was probably more aware of the artistic beauty of it because of your review.