Well, of course like all of us masochists, I have been slaving away in secret, in the basement, behind darkened windows with metal detectors on all doorways making a couple of pieces bound to wow the judges for “that” show!   the one that requires only the freshest of works, untouched by any human (or probably even animal for that matter!) eyes except those of the maker…..

Working R&D in such secrecy has a kind of industrial feeling, like some new drug or amazing machine that “they” might “steal” from me!!  I’m afraid I can’t even speak about the colour or the name of the pieces!  Actually, I’ve decided to make only two because I think two is enough to show that I can make more than one quilt on the same theme and, furthermore, every time I’ve submitted three to anything, I’ve thrown in a third sort of make-weight study piece and so many times that little squitty thing not worth anything, no blood, sweat or tears invested in it, has been the one chosen to my eternal embarrassment!   So the major research stage is now complete, and just the busy work of development remains.  Which is mainly handwork – – now to be done in slow stages due to a couple of fingers deciding it was time they would retire from the game, even though I havn’t!  I am slowly learning to stitch with my non-dominant hand, and it’s actually working.  Though down the line I don’t know if the toes could manage it! 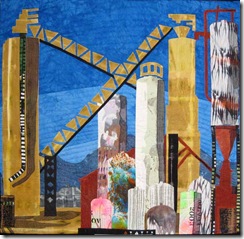 So my way was clear to accept an invitation from the local “alternative” gallery – which, as it happens, sits right next door to the famous Athens Cement Works featured in at least three of my quilts – see left!     One of three pieces, I may say, that were rejected by the last lot of jurors for “that show”!!

But we won’t dwell on that – especially since I have a cupboard full of the poor rejected things!

Alas, the alternative gallery did not want my industrial quilts either. They wanted artists to accept the challenge of making something “arty” from trash that they would select!  It was a bit like that reality TV show about artists in NYC (think it was called Work of Art) except that the prizes were a great deal less!  Four of us (me with my roll of duct tape and three blokes wielding welding tools, table saws and oxyacetylene tanks) were each given a large pile of rubbish and told to Use It All!!!  We had 48 hours to do it, fortunately not in the same studio!!!  My “haul” was a huge roll of  plastic blue leatherette, pieces of plastic brown leatherette, various forms of stuffing, abut 50 old maps, a great roll of that silver pimply insulation stuff you use to keep the sun out of your car, a bag of old ties, an Ikea window blind and some smaller bits of nameless rubbish.   You could add nothing except ways of fixing things together.

At first I thought obloodyell what have I got myself into?  But as I worked on it, I realised it was fun – moreover I could take the covers off the windows, take photos and within 48 hours share the whole thing with a bunch of fellow idiots…oops, artists…..and passersby! Even Uncle Tom Cobbley!

So this is my piece: introducing Sir Sylvester Skinnyshanks – about 5’10” :

Isn’t he lovely?  Very nonchalant!   And these were the pieces my fellow compatriots produced: 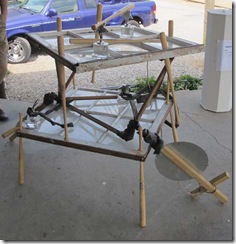 Made by Doug M who told me a hilarious story about making a pair of metal dogs for the Atlanta airport, complete with all anatomical doggie requirements….they were installed and admired and then the next day he received several urgent phone calls!  An operation was requested!  Not only did he have to remove (with the oxyacetylene torch no less) both the offending orbs, but also considerably reduce the size of the organ, a sort of reverse vi-agra!!

Next was Reid’s piece: 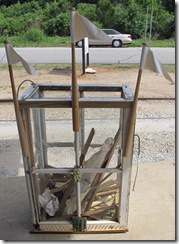 apparently he added the pennants as a nod to Sir Sylvester when he saw a preview photo!!

And the winner was Joly:

a nice conceptual piece – he took the wood and the glass and the paper he was given and smashed it all to pieces, “ground to oblivion” and then layered it into two large glass jars (part of his trash) like those old sand jars we used to get at the seaside.   A great conceit!

Don’t think his prize was a show at the Brooklyn Art Museum though!   WE all got certificates for a local restaurant….something the dairy operation could consider of course.  A pint of milk for all the runners up!

Sometimes you’ve just got to do something daft!!  to break out of the severe stern secrecy of the “Major Work”…..

of course I only have two actual “serious” pieces I’m planning to enter that show…I wonder how Sir Sylvester would feel about mucking out a barn?!!

If you have been, thanks for reading!!  And don’t take it all too seriously!

Posted by Elizabeth Barton at 8:39 AM

Love the idea of grinding everything up and putting it in jars, too.
Sandy in the UK