The Art of daily compos(t)ing

Daily practice is one area where composting and composing differ! They used to say that you should turn your compost, air it, add this or that or t’other, adjusting it frequently. I’ve found it does perfectly well if you just leave it alone! (as long as you follow certain basic mixing rules, of course)

But the art of composing is probably best done on a daily basis. You’ve probably seen the popularity on the internet of a “painting a day”.  However I don’t think a quilt a day is possible, it’s a much slower process – even though those people who ask you to make them a quilt just don’t understand that!!  But I think one  could aim to sketch out a little composition every day. Now these don’t have to be fresh or earth shattering, they could well be copied from the masters. Which masters? It would probably be a good idea to simply work through a compendium of major works by well known artists.

Sketch out the major value shapes in paintings, or photographs (your own or other peoples) even adverts. Any visual image (including your own living room) is good in trying to practice the art of making consistently good compositions.

Some of the best visual compositions I’ve seen have actually been on television – no, not the talking heads!! Not much of a composition there!. However, reruns of well done movies can be full of wonderful arrangements of shapes. Frequently the best art in a movie isn’t the acting, or the script (most of the latter are attempts to see how many clichés you can gather in one paragraph! Just close your eyes and listen some time!) but rather the camera work. Some of the scenes are composed so beautifully and originally it’s a shame the film doesn’t just freeze for a moment for us to admire it!

It’s frequently said that  the  ability to make consistently good compositions can be considerably developed from the practice of drawing a little (say, postcard size) rough little sketch every day. Emphasise the shapes, think of them in terms of abstract masses not actual objects. Focus on their quality and the abstract arrangement of those shapes and the negative spaces. Try to think of shapes rather than outlines because quilts are designed from shapes not outlines. I try to clarify this all the time in workshops. Think about an Ohio Star, for example. What we usually see in a book is: 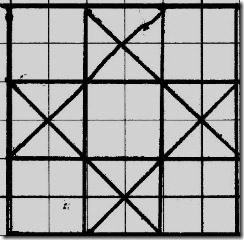 If you look at the above and think about it abstractly, it is 8 very skinny black lines in a square: 2 horizontal, 2 vertical, 4 diagonal. (Please, ignore the graph paper lines which alas came out too dark!)

But what we actually have when we’ve made the quilt is this: 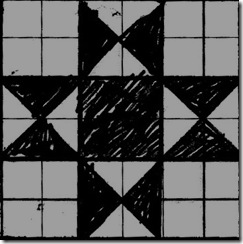 Which is 9 black shapes arranged on a white square – very different!

So always try to think of shapes rather than outlines. And the easiest way to do it, I think, is by drawing with your pencil at a low angle (almost horizontal to the page) and filling in the masses, i.e. the shapes, as you go.

Furthermore, you want the shapes to engage the whole of the background shape – the body of the quilt. Quilts with just one shape plopped in the middle are not very successful. And, sadly, you see examples of them everywhere.

I’m really trying to practice what I preach and sketch out a little composition every day. It’s just like playing scales on the piano, but actually a lot easier and more pleasurable. I just spend a few days in Canada and took a pencil and some paper with me to practice on every day, while I was waiting for the Guinness to be served!

And, if you have been, thanks for reading! Cheers! Elizabeth Posted by Elizabeth Barton at 9:57 AM

Practice, practice, practice! I keep hearing that refrain--only a few minutes a day. And it's true, so why is it so difficult? One book (reading often interferes with other tasks) said to place pad and pencil where you eat breakfast. Maybe I'll try that because I think if I just picked up the pencil it would be a done deal! Thanks for bringing it up!

yes I think it's important to figure a way to get it into the daily routine...one could have a few pieces of paper and pencil tucked into one's handbag for when you have to wait - anywhere, and one by one's evening seat in front of the telly, and, as you say, one on the dining table. though it's difficult to draw and eat!

Practice makes perfect, but it surely is difficult when the preliminary results aren't as good as we had hoped they'd be! I've analyzed why I find it so difficult to practice drawing, and the bottom line is that I hate my results - pure and simple. I'd almost rather go turn my compost!! (oh, and by the way, I did not know that it doesn't need turning so frequently - thanks for that news!).
One of my recent fortune cookies fortunes read "Practice Make Perfect". I've taped it to my laptop's keyboard so that I'll see it frequently during the day! It sounds trite (practice makes perfect), but it's so very true!
So, I'm off to practice!
Thanks Elizabeth!

Ohh this is a good idea especially when you're in the middle of a piece where you got a week of sewing in front of you before you can even THINK of doing something new - this way you can with design a bit but not take time out of your studio! thanks!