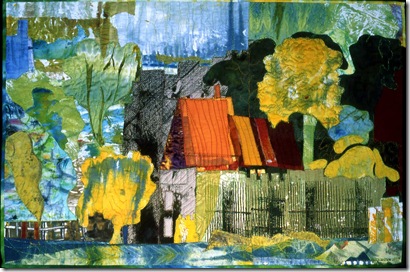 I came across a lovely new word yesterday: sprezzatura.  (thank you, Bob!)
It’s an oxymoron of a word for it means a well-rehearsed spontaneity, a way of doing things (particularly used these days in creating art) that looks careless, easy and natural but in fact is the result of considerable study, experience and practice.   "Ease of manner, studied carelessness, nonchalance, especially in art or literature"  is how it’s defined in the Oxford English Dictionary.

Sprezzatura is an word originally coined by the Italian writer  Baldassare Castiglione  in his 1528  Book of the Courtier.  He defined it as “a certain nonchalance, so as to conceal all art and make whatever one does or says appear to be without effort and almost without any thought about it.”     The aim of the successful courtier was to make his actions, however difficult, look almost facile.  The ideal courtier would wish to have all the practice and preparation, the blood, sweat and tears,  hidden.  Not only his  actions, but his words and feelings would be characterized in this way.  Today, however,  it more generally means  "studied carelessness." 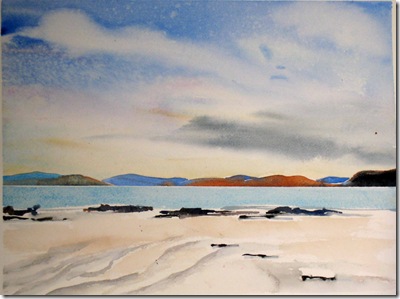 Castiglione wrote his book as a guide for the successful  courtier: a person whose actions would continue to be desirable and necessary to the court.  The ideal courtier should  show skills  not only in battle and athletics but also in the gentler arts of dance and music.  But this should appear to be achieved without effort, with panache rather than painstaking labour.

The term is now often applied to art and I think it’s a concept that we might well consider as important for art quilts.  If you think about some of the most successful and memorable quilts out there, so many of them have a naturalness to them that is very deceptive.  I think Nancy Crow’s work, which I much admire, is a perfect example.  It looks simple and easy – till you try it!  People try to copy and their work looks stale and clunky.  Look at Dominie Nash’s stills from a life series and you’ll see the sprezzatura.  Everything is in the right place, apparently without effort.

Unfortunately a by-product of this is that it can lead students to think that if they can’t make such strong work so easily it must be because they have  no talent.  It’s not that they are without the potential to make such work, it’s that the successful quiltmaker is displaying considerable sprezzatura!

Work that does not display sprezzatura  might  show considerable affectation, appear to be mannered and over-worked.  Sprezzatura is very evident in performance art, dance or music, where the musician appears to play a piece so naturally, so gracefully, so easily that one has no idea that hours and hours of practice and experimentation went into it. Let us not be misled by those "fast" "easy" books and workshops:  they can be  very misleading: "you too can make such beautiful quilts "quick!", "easy!"".  It ain't necessarily so...it could be sprezzatura!


Austin Burbridge gives an wonderful  example on his blog: “Sprezzatura is the art of doing a difficult thing so gracefully, that it looks easy. The greatest living exemplar may be Muhammed Ali, who described his style of pugilism as, "Float like a butterfly; sting like a bee.".
Let us float like butterflies as we make quilts that are stinging in their impact!!

If you have been, thanks for reading…and thank you so much to all those who comment..don’t just think!  write!    Elizabeth

Posted by Elizabeth Barton at 12:55 PM

How good to have a name for it! Over the last year I have reached the stage where I can actually make something relatively quickly - what takes the time is all the exploration, design etc which goes on behind the scenes! It is a process I have learned to love.

This is one of the most interesting posts I've ever read - and all your posts are good Elizabeth! Thank you! It expresses so well a concept, an idea, that I have arrived at independently, but had no name for. The only other concept it can be compared with, is the idea of the need for ten thousand hours' of practice to achieve excellence - expressed and explained in Malcolm Gladwell's book "Outliers".
I shall incorporate the concept of sprezzatura in my teaching - to explain to students what's the secret of achieving that 'look of easiness'.

That is exactly the heartbreaking beauty of ballet.

Glad I found your blog! Love the word - sprezzatura!

Oooh, I aspire to sprezzatura (but didn't have a name for it). I will file this away for when I need some good artspeak.