Many university art departments have visiting artists, they spend a few days with the students, bring work and often give a public lecture.  Attending such lectures is a great way to get a free art education!  Also: no grades, no registration, no hassle!  Can’t be beat.  So check out your local college art department.  Such talks always give me much food for cogitation!

This week we had David Humphrey in town.  He brought several paintings – alas the university locked them up (for insurance reasons – how many things we are now blocked from due to insurance.  Insurance companies are part of the big They that control us so much) – but David had very good images and was very open about explaining his work.

He began by talking about the relationship between a work of art and the viewer.  How the art is silent until the viewer interacts with it but, he feels,  it’s a loquacious muteness.   He speculated that his talking about his art would  alter that relationship.  I’ve noticed this in workshops when we have the final critique.  We go round the room, each person says a few things about their work as they stand by it.  But is this really a good thing?  It does alter significantly what the people think about the work.  As a result, I now don’t allow the designer/maker to say anything about the work until the end of the workshop.  As we go through preliminary critiques, the maker must stay quiet.  I want the viewers to interact with the piece, or the sketches  and  talk about how that relationship is working.  Sometimes, however,  it’s difficult to keep the artist quiet!!! This is the first photograph I took; since I’m using a point/shoot in a darkened auditorium I’d really recommend going to David’s website for clearer images and truer colours.

This painting, he  said, was about telling stories and picturing relationships. The relationship between the Painter and her palette.  I don’t know if art quilters feel as if their fabric presents itself arse upwards!!  I do sometimes want to spank mine though!   But it’s interesting to think about the relationship that we have with fabric.  I think it’s closer than with many other mediums.  Quilters just love fabric, they stroke it , smell it, cuddle it and pet it and love it just for itself!  I’ve never seen a painter get that involved with his paint!!  We’re already ahead of the game on this one! 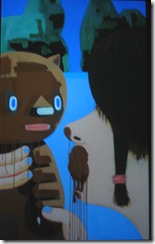 This painting is about the relationship between the chocolate cat and the woman!   I don’t know if we go quite this far with our fabric, or that many quilters actually lick it, but it is definitely a close relationship that affects both parties! One of the painting practices that David talked about was an interest in working from other people’s paintings, literally copying certain elements from them.  This painting is about Eisenhower and Winston Churchill.  Churchill was a fervent and fairly successful amateur painter (painting for the love of it and for relaxation in a very stressful job).  He recommended that Ike do the same thing.  Eisenhower tended to paint rather predictable paintings….David Humphrey copied some of his “hallmark” backbrounds and then added elements, making comments about the painting.  How much fun it would be to do this with art quilts!!  I’m almost tempted to try!!  David is making a statement by painting variations or interpretations of paintings found online or in flea markets. Paintings that are “rhetorically modest, hyper banal and idiosyncratic”.    There are certainly plenty of quilts that fall into that category!!  I like the idea of the idiosyncratic ones!  something to think about.  Painters of course have a very long history of painting and after a while it would be inevitable that there be paintings about painting and paintings.  As there are books about books.  I do predict though, that there will be, sometime in the future, when the art form is perhaps older and more cynical, quilts about quilts and quilting.

I think that’s enough for today, I need to go and lick my fabric!  I will report more in my next post, especially about his collaborative work which is quite fascinating.   If you have been, thanks for reading!  Go check out the local lectures!  And all comments very gratefully received, love to hear your voices.    Elizabeth

Posted by Elizabeth Barton at 6:21 AM

Got a good chuckle out of your closing... I read your blog just after reading Leni Weiner's post about finding your voice and what is art. An interesting juxtaposition.

ps. I DO enjoy reading your blogs even if the blog police think them too wordy