The Alchemy of Synergy

It’s so energizing working with another person, ideas spring back and forth…and you’re  much more inclined to take risks.  Psychologists have studied  the risky shift  in more negative contexts, but in art shifting to taking more risks is a very positive activity. It’s something I’ve often found difficult to do, especially in composition, but when synergised all things can happen.  That’s why it’s so good when you find a friend who has the same interests and energy  so you can get together on both surface design and critiqueing – of one’s own work – and others!! Oh the catalogues that get destroyed then!

Ken Robinson discusses this alchemy in his book called The Element – one of many ways to get into the Zone…the special creative alpha space where you are flying!    Artists have always found that getting together in groups have lead to leaps forward in ideas, in composition and in technique.  It’s always good too to play with someone who is a little better than you!!  Makes you up your game!  I’ve admired Terry Jarrard-Dimond’s work ever since I saw that Big Red Dog cavorting around quilt shows a year or so ago..this was the boldness I’d like to achieve!

Turns out that I had some skills that Terry was interested in too – viz a lot of knowledge of surface design.  I’ve always been thrilled by the magic of screen printing..scraping back and forth with thickened dye across a screen, then just peeking under the end to see what wonderful thing has happened there!   As a result, we’ve been getting together on an occasional basis  to try to discover the formula for gold!  She’s blogged her screen printing discoveries (we have been exploring techniques from Kerr Grabowksi, Joy Stockdale and yours truly) so I thought I’d show mine too. 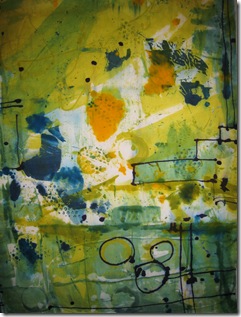 In this one, I was using a mixture of torn paper resists, and painting on the screen, followed up by directly painting onto the fabric.   Now in the past I would usually have cut a piece like this up to make chimneys or something!!  but I’m thinking of being a bit bolder – that old risky shift may enable me to create more than lead from these ingredients!  I love the sense  of space here, but would definitely like to add some structure….so I’m thinking of taking some of these elements and working on some ideas for supplemental fabrics to go with this. 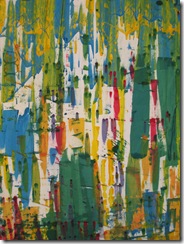 In this piece I began with a  pattern of scattered drops of thickened dye and then started adding those more architectural elements.    I’m almost tempted to let this one stand alone as a finished piece…a Very Bold move for me…but that is the effect of synergy!  I have done similar pieces before, but some years ago (see blog of  May 3rd). 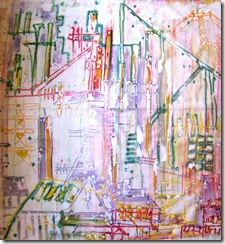 with this piece I drew on the screen with thickened dye, then printed it off onto fabric pre activated with soda ash.   I like the idea, but it’s a bit wimpy….my new synergistic self wants Bold, not quiet polite wimp….so I’m going back to this screen and with a foam brush I’m going to add darks, bold shapes – especially in that middle area.  Then I think I might just print right over the top of this first image…Especially if I can offset it a little…hmmmm that might be rather interesting!!!

and so…off with the computer! and back down to the dye studio..and if you have been, thanks for reading!  don’t forget to comment!!  Elizabeth

Posted by Elizabeth Barton at 9:46 AM

I love this work. Especially the first image.

Hooray for you, Elizabeth! Isn't it liberating? I can't imagine working any other way. Can't wait to see what the "new" synergistic you does with these pieces.