a couple of blogs back there were some questions:

I think he was talking about work that is not representational – work that is about something other than the mere objectives portrayed. 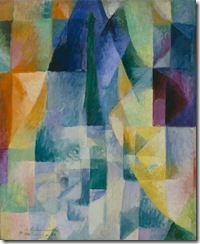 Impressionism, for example, was described by Delaunay as “the birth of Light in painting”.  He felt that Light in Nature creates  movement in colours.  He painted a series of paintings called Simultaneous Windows that explore his ideas about simultaneous contrasts and harmonies in colour.  If you could make a quilt like this!!  you might be perfect for the gallery!

Interestingly, there is a quiltmaker whose work is very like this and that’s Emily Richardson:

As the link shows, Emily’s work is in the “other” fiber gallery in Philadelphia: Gross McCleaf.  A quiltmaker whose work, the Snyderman gallery shows exclusively is Nancy Crow and she also is clearly fascinated by the effects of one colour upon another as can be seen in her Color Blocks series.

Colour field painting began in the mid 20th century and is characterized by large fields of color, often flat – but not always. 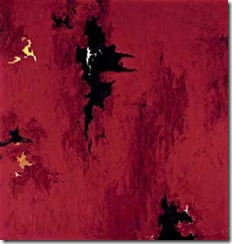 A quiltmaker whose work has some of these characteristics is Dorothy Caldwell: 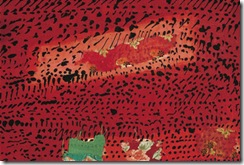 and she is also represented by the Snyderman gallery.  Dorothy is strongly influenced by landscape and  has just been awarded a grant by the Canadian government to study in the Arctic.

Mark making is a phrase that is currently popular – not so bad as “iconic” (please make sure I have a stiff drink before you use that word!) but definitely “in”. 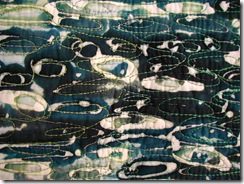 It literally means making marks….but in a very “artistic” sense!!!     I did notice some pieces at the back of the catalogue that Snyderman put out in conjunction with Nancy Crow’s last exhibit that were excellent examples of how one might use “mark making” as an expressive tool.   The most common way quiltmakers are using this technique is via a screen – using a syringe filled with thickened dye one can make marks on the screen…then dry it…then print with clear or dye coloured  alginate. 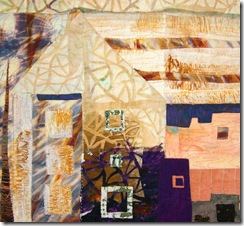 Here are a couple of examples from my own quilts – circular marks drawn on a screen for Farne Islands above, and on the left triangles and scribbles from Ferrybridge.  (Both quilts can be seen in full on my website.)

The other question was about craftsmanship:
Deb asked:  “ I'm wondering about how Hoffman would assess  sewing skills? I like to think my pieces are built to take it but is that what he means?”

I think what he meant was merely that the craftsmanship be excellent and not detract from the image.  The point he was making was that quiltmakers have tended to stress craftsmanship – completely understandable initially in the traditional learning phase, over and above composition.  For me personally I hate a regimented 12 - or worse yet 18! – stitches to the inch – I like to see the hand of the maker in the stitches.  If you’re a big flamboyant personality – let those stitches stand out proud!!!  I also don’t mind it if the machine stitching varies slightly in length…we slow down round corners…tiny little steps, and then speed up on the straight – and the steps get bigger! to me that puts the person into the piece.  As long as the stitches aren’t broken and hanging down, or there are lumps where you don’t intend lumps, or worst of all – the quilt appears to be pregnant with a long thin board if the sleeve is on too tight – then I think you’re okay!

and now…back to appliqueing lots of little red triangles onto the Red Cement Works piece which may be called Towering Tanks or may not, as the mood takes me!

so, if you have been, thanks for reading!  All comments welcome…and will (eventually) be commented upon themselves.    Elizabeth

Posted by Elizabeth Barton at 12:07 PM

There's also stitch as mark-making of course - am currently working on ways of using the sewing machine for things other than joining and stippling...

I don't see a photo of 'Farne Island' on your website. Is it elsewhere online?

thanks for noticing, Jill! I've put it up now - on the Landscapes page...scroll down. Elizabeth