A friend told me the other that her goal was to become more spontaneous, less controlled in her work and that set me thinking about improvisation. I always thought that sounded like an easy spontaneous thing to do but now I know that’s a myth!! A myth perpetrated because we all like to think that there is a magic easy answer… But there are no princes (or princesses – for that matter I’m sure it isn’t only maidens that kiss frogs!) locked up in our pieces of frog fabric to be released by the magic of a few deft passes at the design wall!

If you study the art of improvisation in any medium, you will quickly learn that there is a basic structure beneath each piece – music, comedy, acting, knitting etc. I once went for a few lessons to a teacher of jazz improvisation (had to give up, the dog howled – well that’s my excuse!) – and was amazed at how much planning went into it. We began with an analysis of the chord structure of the original piece…and then it got really complicated. Given a certain basis, only particular sequences of chord changes would fit…it was like one of those little puzzles where you move the squares around in a frame till they make a picture only you can’t see the images at first. So you have to find the right images, then know the rules of how to move them around.

Musical improvisation has been around for a long time – at least 10 centuries ago sections would be notated as improvisational. However, there were rules, and gradually these became more detailed: e.g. adding in one of several types of trill based on a given chord, or reversing a melody, or changing the timing of a melody, or adding in another melody onto the same chord structure – or changing the time pattern between the right and left hand (e.g. short notes in the left hand plus longer in the right, then vice versa). Interestingly, improvisation in classical music has become much rarer these days.

Improvisation has of course always been central to jazz. But again, structures are often defined: there are specific sequences of the playing of the melody, and then half melodies on different solo instruments followed by the full melody again and other well known patterns. Other “rules: also hold for example: there would only by a limited number of chords one could play to oppose a given dominant 7th, or whatever.

Improvisations by great masters like Charlie Parker have even been transcribed (a nice oxymoron) and are studied for their structure by students of jazz improvisation.

Comedy: When I first saw comedy improv I was amazed at how clever and spontaneous they were – but it’s a mirage!!! The basis of improvisational comedy is a set of structures (like a chord sequence) which are deployed using specific tools.

The structures are usually not that obvious to the admiring, (or rather embarrassed !) audience but if you look – they are there. The training in comedy improv can be quite extensive with tens if not hundreds of possible scenes and situations being practiced. Having been given the “melody” of a situation by some audience member (e.g. a couple celebrating their honeymoon….after an engagement of 8 years!), the very skilled improvisers can decide what structure of a piece they can use to make the most fun!

There are distinct parallels to music and comedy with the improvisational techniques used in art quilts today, or any kind of “collage” art where you are taking pieces of “something” and placing them onto a background surface of some kind and arranging them until they’re “right”. If we do it well and with skill, the melody will sing out and the supporting chords will be in harmony! The result should look spontaneous, but is really the result of skill and knowledge, especially knowledge of structure and harmony – as Kandinsky called it: “regular irregularity”. 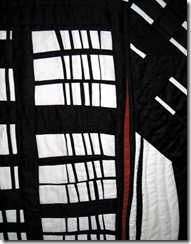 So is it possible to reach some definition of improvisation in art quilts? Can we define the rules?

The first improvisational quilts came from the African American community and were developed using structures different from Anglo American quilts (which were based on known, published, geometric or botanical patterns). The African American quilts were often based on a structure determined by the shapes of the cloth: i.e. the shapes that remained when you took worn clothing to pieces and cut out the “good bits”. Or the shapes of the scraps that the “white lady” in the big house gave you. Or the shapes that happened when the fabric was cut into rough strips which were then sewn together. One initial rule, therefore, was that of conservation. Beyond that the quilters (in the Gees’ Bend videotape which I saw at the Whitney but cannot find on u-tube unfortunately), talk about balance and interest. One lady stated that “my pattern came from my head” – she had an idea that she was working on. Nobody talked about sewing pieces together spontaneously. In the same way that a musician could not create improvised music by randomly playing notes.

One thing is very evident: begin with a “melody” – a simple design or visual motif (like a square within a square, or a spear shape) – and then create variations upon it. The traditional way to treat a simple design would be to repeat it, perhaps divide it into smaller sections, but retain exactly the initial shapes. In improvisation, the design is not repeated exactly (n 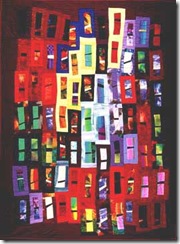 o 57 repetitions of On Top of Old Smokey!). However, the variations on the theme should relate to it – not two random chords played together, but two related chords. It’s important to make sure that the initial melody is very evident – in jazz this would be at the beginning and the ending of the piece of music – the two most important places. In a visual medium this would probably be in one of the “sweet spots” of the work (i.e. just off centre). Around the melody, the artist arranges the variations in a balanced way, but not so balanced that the piece becomes insistently symmetrical – that would be “against the rules”! If you think about it, it’s a very natural way of composing…as in nature - no two leaves on a tree are alike, but they are clearly all related.

Planning and skill make improv work! Not random spontaneity - as freeing as that may sound!

This is getting too long! But I shall keep thinking about it, especially about possible structures underlying improvisational work – I’d be interested in your comments! What structures have you seen? And whose work is truly improvisational?

And, if you have been thanks for reading! Sorry to be so wordy….blame my friend and her goal!

Posted by Elizabeth Barton at 12:23 PM

Well done! Improvisation doesn't just happen, that's for sure! When I studied ballet we would sometimes have time at the end of a class to improvise to music. Of course the music dictated a lot, plus the skills we had, but primarily we had muscle knowledge of sequences of steps. They were often the foundation. Variations were created but there was a dance melody--those sequences linked together--with variations. A very thoughtful topic--Thanks!

very interesting to read abot this.
Thank you

I love this post! I've been working at improvisational bead embroidery for a while now after years of doing more traditional bead work and the excitement and surprise of improv really keeps me going!
Thanks for clearing some things up for me!