I described some of my recent Art Inspiration trip to New York City a couple of days ago…but there’s more!

One of the highlights of the trip was the Bonnard Late Interiors show at the Metropolitan Museum.    I have always loved Bonnard because of his unusual compositions – looking at many of them at once, I realised that he often crops the image severely.  It was fascinating to read that he actually worked on large pieces of canvas attached to the wall, and cut them down to size when the painting was complete.  That’s a technique I’ve used with quilts!  And now I can refer to a master painter’s similar habit!  Cutting down to the important part of the painting puts you right into the scene.

When Bonnard moved to the Mediterranean coast the change in light in his paintings was very clear – everything became infused with a golden hue, glowing and shimmering.   People have written about his wife being in many of the paintings, and reading the curator’s notes about his life, Marthe was a constant presence – 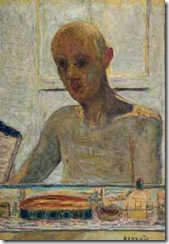 a part of him -  and when she died after their long marriage, the self portraits he painted looking in the bathroom mirror were quite tragic.  Also imbued with anguish was a portrait of his mistress and his wife, the mistress with swollen drowning blue eyes – she later committed suicide.   Sadly, the catalogue had very poor colour, though it did include most of the work.    Many of the images I’ve mentioned are on this site.

Bonnard constantly made sketches in little notebooks (3 x 5) – we have no excuses not to do the same!

After Bonnard we made our way down to the Armory to see the SOFA show.   There were only a few exciting things to see, and after Bonnard, many things looked so trite and glitzy.   There was definitely work where the artists should be shot!!  I noticed that attendance was sparse and although the attendant assured us he would “soon run out of catalogues” – there were huge piles of them around him when we left!   Most of the people inside appeared to be networking rather than looking at the work, and if you did admire the artwork , the dealers were really treating you like new best friends – from which I assume sales were very slow. 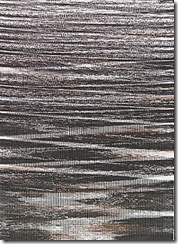 There were only two pieces I would have taken home (I always visit a show in the hopes that I will be awarded 3 pieces to take home with me!)….gorgeous understated silk carpets at Bennet Bean – one of those horrible Flash sites I’m afraid.  The piece I liked was 3 shades of grey – so delicate…maybe I should revisit grey!!  However, I think instead of more grey quilts, I might knit a sweater based on rug I saw – it was simple opposing incomplete stripes of grey.   A quick sketch and there was an idea!  Of course now  I need to improve my knitting skills!

My other favorite was a small woven piece in the Brown Grotta booth (just visible above the seated woman) by Naomi Kobayashi.   Here is a different piece of hers, I lost my photo of the sunlight on water piece, sadly.

The next day was Neue Gallerie, one of my favorite NY museums.  It was originally an elegant home overlooking Central Park and still has all that presence.  They show mainly 19th and 20th century German art – many of my favorite pieces – little square Klimt landscapes, like jewels, wonderful clocks (actually working!), jewelry and always there’s a special exhibit too. 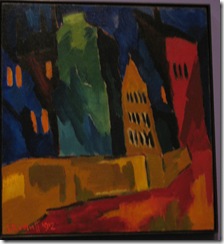 Currently it’s Brucke: the Birth of Expressionism in Dresden and Berlin, 1905-1913.  Brucke was a group of 4 artists, Fritz Bleyl, Erich Heckel, Ernst Ludwig Kirchner, and Karl Schmidt-Rottluff, who decided to live and work together to try to create a kind of utopia in a world that was falling apart.  The colours are gorgeous, the lines are sharp (they revered woodcuts), the emotions strong.  Here’s an example by Schmidt-Rottluff.    don’t you just want to eat those saturated colours?!!  Sadly, I could find no books of his art listed on Amazon for a reasonable price. Wouldn’t it be amazing to live and work like that?  Of course you have to be young!! and I believe various other “creative” activities were indulged in!

And now, I must get back to the sewing machine!  I have one more episode about my NYC trip to write, probably in 2 days…..and, if you have been

Thank you for sharing and for providing links. It is refreshing to 'fill up' with art and inspiration, isn't it?

I enjoyed reading about Bonnard and then looking at his work. I could just feel the tension with the mistress and wife and found it so interesting that his paintings were of just everyday corners in his home, even his self portrait being in the bathroom mirror. Thanks again for sharing.

I have always been a fan of Bonnard as well. How interesting that he cut his canvases after he finished painting them and you do the same with your quilts. What a visual feast you have had. Now I am wondering how this will inspire your next quilts!