In previous blogs I’ve discussed the elements  we use in making a quilt design – the shapes, the values, the colours and textures.  Now I’d like to introduce some of the ways in which we can organize these elements into a pleasing and interesting arrangement.  One of the most basic principles is that of  Unity: harmony in the elements!   This was the second thing I tended to forget when I first began to make up my own quilt designs.

The first thing I forgot was to have some variety, or tension.  I wrote  about that on Feb 27 in “The Art of Unpredictability”.   I’m pretty good at forgetting things, by the way!!  So, to begin with my designs were Really Boring because I would draw out a design for a little block and then repeat it without change across a rigid grid, making sure I had enough fabric so I could use the same stuff in every block!!  I look back now …and am amazed -  “what was I thinking?”.   I remember clearly being sick a lot as a child and examining the wallpaper pattern in the bedroom desperately looking for a place where they’d changed it a little bit – a red flower instead of a blue one (of course they hadn’t!)…..I even made a few small changes myself…not enough for The Parents to notice, of course!  And then, here am I a Grown Up  making boring wallpaper myself!

But then…when I stopped being boring, I launched straight into chaos.  too many elements, too mixed up.  Thankfully I didn’t take any photographs of the worst efforts..but here’s a later worst effort: 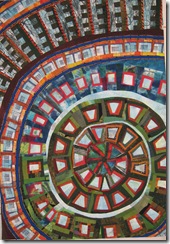 As you can see, there are a number of mistakes…but the one I’d like you to focus on is how I quite arbitrarily seem to change those circling elements, so I have 4 different things spiraling around.  Go and look at nature!  She Almighty usually gets it right – as a sea shell, or snail or tree rings circle round, they don’t suddenly change shape, colour, texture, value balance!!!  I do like the last two strips by the way, there is some relationship to each other both in tone and in meaning (the tiny pictures on the third strip are of windows)….those two alone would have been enough.

It’s essential for a good design to have the separate sections of the piece strongly related to one another.  I needed to show a lot more restraint!  (in many ways!)

Since then I have learned that Unity is achieved by planning ahead which the shapes, colours etc  will be the dominant ones.  Everything should go together e.g. a squirrel’s tail on a bulldog would look weird..or a bar of a Souza march in the middle of a Chopin nocturne.   Lines, value, color, texture, shape or direction that is not repeated, echoed, integrated elsewhere in the piece can compromise its unity. 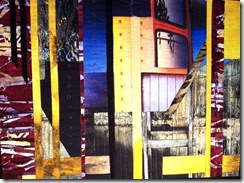 Here’s a second quilt, done much later.  Now in this one I have a number of different elements but because I’ve used that strong vertical yellow as a dominant element it helps to pull all other  sections together.

One shape, value, color temperature or texture or direction should predominate – this leads to unity. these can be combined but one must be dominant.   Or put it another way: choosing a dominant design element limits the possibility of chaos.   Unity is, therefore,  achieved via dominance. 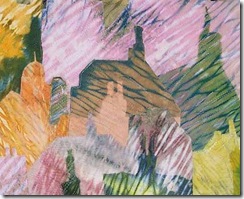 In this detail from City of Willows, you can see I’ve a variety of colours and line direction and values, but the shapes repeat, the low intensity of colour repeats and the texture is dominant.

A general theme/structure must be imposed upon parts by the whole. This is true for the whole piece, but also for any subdivisions..it also holds true for each design element.    We know this from any study of nature, and the amazing fractals we can observe.  It’s actually very helpful to look at nature to see how all these design principles/guidelines work so successfully for both beauty and practicality:

I’ve often wondered how people were successful at creating wonderful art quilts when they say they work quite intuitively and don’t plan at all. While, I suspect that many of them are not successful, there are some major exceptions. People whose work I like a whole lot! Nancy Crow, Emily Richardson are two such.

So how do they do it?  I think it’s because they choose a dominant design element right at the outset of the piece, or the series of pieces.   This then leads to repetition which pulls the work together. However, they both love to cut freely and so their shapes vary somewhat – but not too much: unity with variety.

so – take a look!!!   At my quilts, at your quilts, at those of your favorite artists, and above all at Nature!  Observe first the harmony and unity, then look for those little differences that give the variety and interest!

And, if you have been, thanks for reading!!
Elizabeth

Posted by Elizabeth Barton at 7:36 AM

Well done! Your comments are well-illustrated by your pictures. That makes it easy for me to understand your point. Thank you!