I don’t know how you could bring synaesthesia to quilt making but it would be a neat idea!!

Synasthesia is experiencing a response in two or more senses at the same time. Some smells and tastes to me have distinct colours, other people experience certain tones as colours. Imagine being able to make a quilt of such a sequence of colours that people could hear music when they looked at it, or smell roses!!

Artists have explored synaesthetic effects for at least 150 years, probably longer. Turns out that flashing coloured lights round during a concert goes way back before pop music was ever invented – to the early 19th century in fact. Before even did his bit with inventing light bulbs, stage manager and actor Henry Irving was coloring the lime lights by painting a translucent lacquer onto the glass along the front of the stage to give different color moods.

As soon as electric bulbs were invented, Dancer Loie Fuller designed stage lighting using upto 20 diffferent lamps with rotating coloured filters, and a double lantern that could mix colored beams. She even used glass floors lit from below (nothing is new, Michael Flatley!). 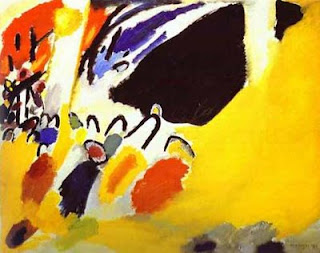 One of my favorite Kandinsky paintings – the big black piano on a yellow ground– that he painted after hearing a Schoenberg concert (Three Pieces for Piano, in 1911) was inspired the colour of the music. Kandinsky showed the dissonance that Schoenberg was exploring with the bold yellow and black shapes. Kandinsky considered yellow to be an earthly colour (in his treatise On the spiritual in Art) which could have the effect of representing “mania or frenzy…like the reckless pouring out of the last forces of summer in the brilliant foliage of autumn…a wild power”.

A colour organ was invented (this was pre laser and computer days) to play specific colours attached to particular notes..and pianists such as Alexander Laszlo integrated a colour light show with his concerts in the 1920s and 1930s. After the second world war, cinema began to use color to illustrate the mood of the scene. I remember when I first saw Eisenstein’s Ivan the Terrible, there was a tremendous shock in the audience when the black and white movie suddenly exploded into dramatic colour. You felt it viscerally!! Eisenstein called colour a “terrible and savage tyrant” and he wanted “red drops of blood in the black and white”.. 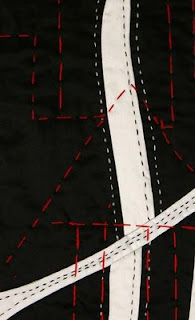 Red and black and white! A powerful combination – can you hear it? Smell it? Taste it? Feel it in your bones? I hope so…

Posted by Elizabeth Barton at 4:38 PM

Fascinating blog! Thank you. Your black and white houses look like a street in Chester to my eyes. I thought I detected a British accent. The spelling of the word "colour" gave you away. I was born and educated in the UK, but am now an American citizen with a funny accent and now spell colour funny, too.
Cheers!