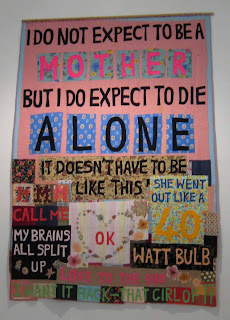 There was a very interesting article on criticism in the textile arts in the Fall 2008 Surface Design Journal. The author, Maria Buzsek (art historian and critic at Kansas City Art Institute) feels there is a deep divide between what she calls “quilting grannies” and emerging conceptual artists. She felt that her students’ work was “freewheeling, diverse and conceptual” as opposed to the “formalist or utilitarian” work seen in many fiber shows.

She felt that there are two very different types of work evident in today’s textile art world:
the “craft world” which insists upon the romance of the medium
versus the "art world" focused on the romance of the conceptual. And as a result many contemporary artists in this medium find themselves caught in between these two extremes.

Buzsek feels that part of the blame lies with the museums – who have historically tended to divide themselves between the decorative and the conceptual, and journals/magazines who have done likewise. (However, there are now beginning to be some shows – here in the US – particularly the two shows at the American Craft Museum aka Museum of Art and Design: Pricked: Extreme Embroidery and Radical Lace and Subversive Knitting that do support a middle ground. And several other such shows around the world – especially in .)

Another reason for the divide is because people choose to work in fibre for social or historical reasons rather than wishing to “plumb the unique material properties (of the medium)”.

She concludes: “artists working with craft mediums ignore the theory and criticism of the broader contemporary art world at their peril”. Firstly, because in doing so one would miss the work that is being shown in the fine art world that draws upon textile history and secondly, because by seeing and thinking about such work one might be led to further discoveries, further adventures and depths of one’s own. Instead, each world could enhance the other.…not two sets of people divided but each benefiting by a close knowledge of the work of the other. A marriage of medium and concept!

Perhaps then there might be a dialogue between Tracy Emin and the quilting grannies instead of each group looking down on the other, each being informed and enlightened by the other.

In the last 2 years, I saw both the Pricked and Radical shows in NYC, Ghada Amer’s work in , Tracy Emin in and each time came away in awe at how far one can go with fibre. When we make our first quilt, we are but taking the first step on what can be a very adventurous and self revealing journey – if we just open ourselves up to the possibilities.

Posted by Elizabeth Barton at 11:48 AM

Hi
I have been enjoying your blog for a while now and could not help but speak up on this one. First of all why equate "Granny" with traditional in the first place.
I am a Granny and although I began quilting only traditional pieces as many of us have, I continue to evolve and am now doing pictorial art quilts. I also feel as you do, we have to go beyond categorizing fiber artists and instead just recognize and appreciate what each of us is doing no matter what the subject matter, skill level, or education nor if we are child or a "granny".
We are all learning & growing because each other.

I am just returned from the Houston show, only my second visit. I was impressed with the dynamism of several 'traditional' quilts created with synergistic designs and colors. Alternatively I saw many 'art quilts' that appeared to me as conceptually flat. All in all I preferred those quilts that succeeded beyond design and color with something interesting and thoughtful to say.