From the image to the Art

It is the artist’s task to help/make the viewer see the beauty in things that they might well have missed.

This is true regardless of the image that is the starting point.

Still life: whoever looked twice at an old bottle? Morandi helped us to see the nuances of shape, line and relationships with his many bottle paintings. 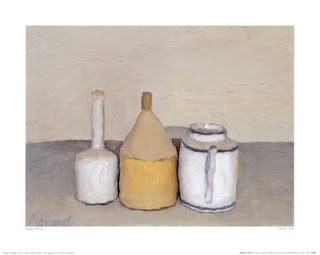 Who would have thought that drinking straws and paper cups could create immensely beautiful installations?

Tara Donovan at the ICA in Boston (winner of the MacArthur genius award this year) shows us the beauty in everyday items. 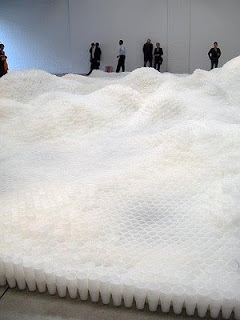 Dominie Nash shows us the amazing pattern and structure of a few items including a pair of left handed scissors in a jar on a table. 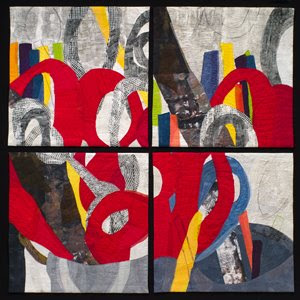 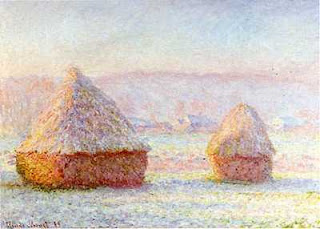 and if you look at photographs of the actual scenes that Cezanne or Van Gogh painted you’d be amazed at how ordinary and prosaic many of them are. 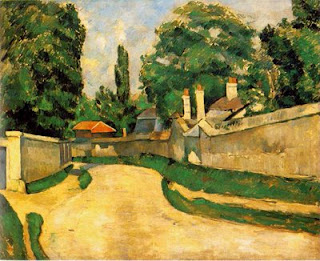 You don’t have to go to to find wondrous ideas, they are as close as your driveway..looking down the street!

It is good to approach the scene, however, with an idea in mind: the interlocking patterns of the objects, the tenderness of the light, the balance of shapes, the munificence of man or nature. Always begin with a focus arising directly from your feelings, impressions, inspirations. Don’t just think oh this looks pretty I’ll copy this one. In my workshops I’ve noticed the most successful pieces are the ones where the quiltmaker has had a really strong feeling about a particular aspect of the photograph she brought to the class. (guys are welcome by the way, they just havn’t showed up yet!!)

In his book, Carlson’s guide to Landscape Painting, John Carlson suggests an interesting idea: that one take a scene – such as a landscape. You could also do this with a still life, or a photograph of a marketplace. First, sketch an unplanned straightforward copy of the image. Then make several more sketches emphasizing different aspects of the scene: e.g. in a marketplace you could make a sketch of the pattern of the cloths covering the booths, or you could focus on the people, or the produce, or the interweaving verticals. In a landscape you could make a sketch focusing on the trees, or on the sky or on a house or cottage, or the flowers, or on the people in the landscape. What you will gradually discover is that when you focus in on making one thing the main area of interest, the piece as a whole becomes stronger.

In this photograph taken from the window of the hospital where I used to work in Leeds (St. James for anyone reading from Leeds!), what interested me was the way the colours harmonized so beautifully, the many different shades of grey from warm to cool within the city. 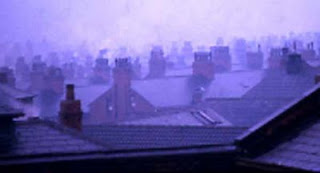 And so I made this quilt: City of Mists: 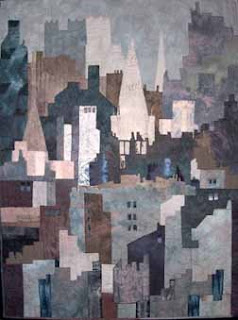 But I kept thinking about all those rooftops and chimneys...and made another piece focussing much more on the interaction between roofs and chimneys, and between chimneys themselves:

In the picture below it was the intimacy of this little passage way and set of steps that intrigued me - but at first I wanted to focus on that stunning gate! what a wonderful idea to paint it red. 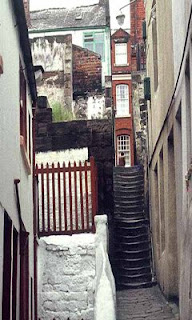 and here's my quilt: 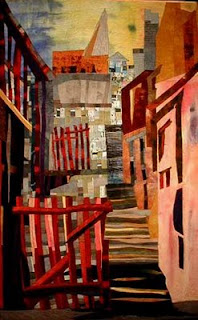 looking at the same image with a different emphasis, I wanted to show the stone steps so worn by time, the thousands of folk that had trudged up them - this ginnel is in Whitby by the way. 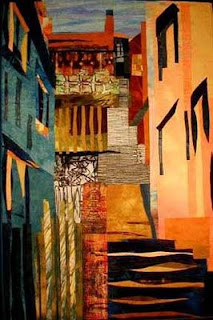 So - as artists we have a duty to help others see these things too...to work to work!!!


Posted by Elizabeth Barton at 2:47 PM

Wonderful, Elizabeth. I really enjoyed reading this and seeing the different pieces made from the same view....