I’m trying to come up with different ways of indicating water – which I’ve made quilts about before but I want to do better. Some of the best quilts on water I’ve seen are those made by Pauline Burbidge.

John Walsh is a well known collector of water quilts though I’ve never been lucky enough to see any in an exhibit, I know he has some fabulous examples.

Gayle Fraas and Duncan Slade have made some wonderful pieces – fine delicate detailed realistic work – about water. And nobody else catches the light on the saltwater marshes like Linda Behar – with her multi thread embroideries. I hope to learn!

Previously I’ve usually indicated water by screen printing. I have a photo emulsion screen – actually of piece of wood under an electron microscope – that I’ve used in several different guises in quilts – it made really nice water at the bottom of the quilt Where Bong Trees Grow – after I’d screen printed first with pigment, then with dye, then discharged it randomly, then overdyed….that was a bit labour intensive! 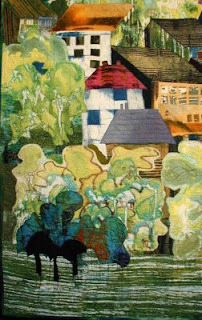 also was screen printed – this time with deconstructed screen printing – where you draw or scrape onto the screen the image you desire then leave it to dry before printing with clear alginate. I also had a newspaper stencil screen – one of my favorite ways of making a screen – in that quilt. Here’s a detail so you can see how I tore the paper. 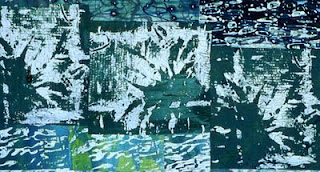 Another quilt where I used a torn paper stencil for all the background was .

I had a brief sojourn with disperse dyes - not my favorite because of the fumes, and finally I donated the heat press to an art school - but I got some nice pieces before I decided breathing was more important! Actually this one won a first place prize at Art Quilt elements when it was at the Sedgwick. 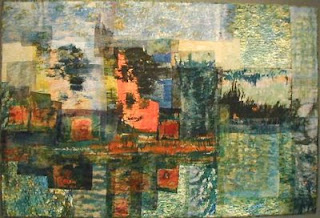 I’ve not made quilts from digitally printed fabric from photographs very often – but here are three examples: 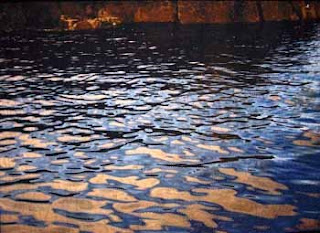 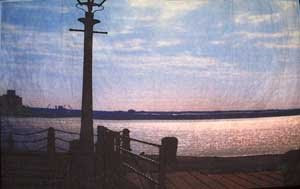 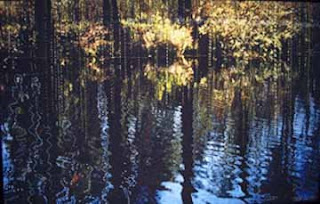 I did make a quilt about waterlilies for a commission - I had a lot of fun with this one; as you can see it's a little different from my usual style - not a building in sight! And flowers! 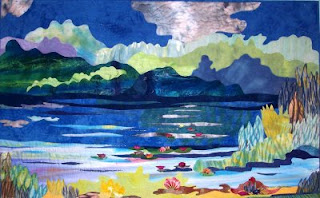 But today I wanted to try other ways of indicating water. I made a nice little sample which I’m going to send Karen Stiehl Osborn for the Cancer auction that Virginia Spiegel is organizing (not finished yet so no picture, I’m afraid) – stitching the light on the water which came out quite well. I’m going to try a much bigger version of this as my traveling handwork when I go to and later this month.

here's a little watery stitched piece I made last time I travelled to England: 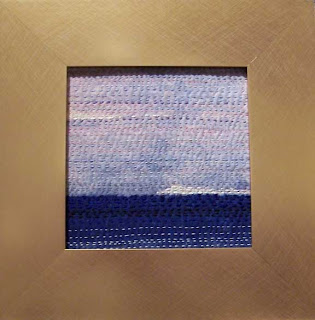 I thought it would be fun to frame it and I sold several like this, but this particular one was my favorite so I gave it to a daughter! that way I can enjoy it whenever I visit her!!.

And then I thought of piecing in some giant waves…I cut and pieced long skinny bits…had them all ready to insert and took a break to feed t he neighbour’s cats (you never thought I’d mention cats!) – when I came back John said – “I picked up all that scraggly fabric you had on the study floor and put it in the garbage – it w as rubbish, wasn’t it?”

I’m thinking again about how to make water………..

Posted by Elizabeth Barton at 4:11 PM