I’d love to try my hand at jurying. I’ve only ever had one experience and it was in jurying mixed media for an art/crafts fair. It was fascinating prospecting for excellence in different mediums. I discovered that clarity of purpose in the maker does stand out - especially if there are several examples shown. Seeing several pieces by the same person also helps you to decide if they just keep making the same work over and over again – I know we’ve all seen that! Hit on a winner and make it in as many different colours, shapes and sizes as you can dream up! So I looked for a clear, strong and fresh style regardless of medium together with some real ingenuity and imagination in expression of the style over several pieces.

The hardest part of jurying was deciding which of the least able artists should have the few places left over after we’d awarded spots to those whose work we felt to be worthwhile. Then I must admit it was a bit of a toss up: one clay, one wood, one glass, one jewelry!!!

If I were a juror with power (!!!) I might be inclined to say – let’s just leave some empty spaces rather than fill the remaining slots with tired, trite or predictable work. I would be happy though to give those places to new upcoming folk whose work was perhaps still a little raw but looked different and new and exciting.

So to all of you out there reading this who are looking for jurors….I’m willing!

What I’ve actually been working on these last few days is sorting out loads of show entries, paperwork etc. Very boring but very necessary to the working artist. I’ve been on the other side of the jury situation trying to decide which piece to enter which show. It’s very difficult. In the past I have tried to focus on what I think those particular jurors would like – an impossible task!!! But this time I decided to use a different principle of choice.

. Over the last year I’ve made about 12 pieces that have focused on line rather than colour. They’ve focused on specific elements within a building, rather than the cityscapes, and they’re definitely not as “pretty” but I feel they’re strong and intriguing. (well, I hope!!) My friends say “yes, this is stronger work”, but people in general prefer the older work. So I’m going to put them to the test – I’ve entered 3 shows with the new work and I shall see what the consensus is!!!

Below are 2 examples – you can decide which is which!!! 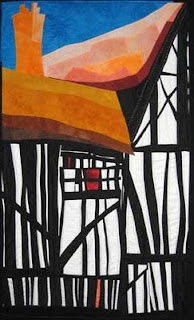 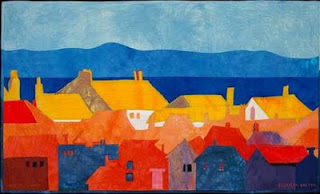 And, if you have been, thanks for reading!!

Posted by Elizabeth Barton at 1:39 PM

I think the top one is your newer work and I do think it is stronger. I love the other, but the othe makes one stop and look closer.

The black/white/orange piece is my favorite of all your new work - lovely sinuous lines make a great statement about the effect of time on buildings. However, the lower piece is, may I say it?, charming. This one for Aunt Effie.

I think the bottom one is more unified. I top one bothers me because of the difference in the black and white vs the mottled rooftops. But I've never been a judge and this is my humble opinion! They are both beautiful!